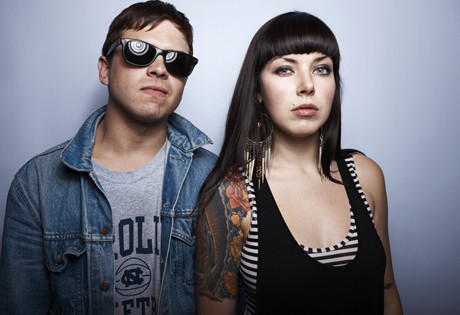 Start by filling out our no-obligation entertainment request form to check pricing and availability for Sleigh Bells or whoever else you may want.

Our Sleigh Bells agent will be happy to help you get Sleigh Bells's availability and booking fee, or the price and availability for any other A-List entertainer, band, comedian or celebrity you may want for your corporate event, private party, wedding, birthday party or public show.

The pop music duo known as Sleigh Bells was established in Brooklyn, New York by founding members Derik Miller and Alexis Krauss, who had both been performing in other bands as teenagers until they came together in 2008. After establishing themselves as Sleigh Bells, they began performing together and recorded their debut EP, Sleigh Bells, which was released in 2009.

The album Sleigh Bells garnered the band plenty of positive attention from a variety of high-profile media outlets, including the New York Times and the Guardian. In 2010, the band signed with N.E.E.T Recordings and released Treats, a debut album, which spawned the hit singles “Tell ‘Em,” “Crown on the Ground,” “Riot Rhythm,” and “Infinity Guitars.” The release was supported by a number of performances, including apperances at the Pitchfork Music Festival, the Primavera Sound Festival, and the Coachella Valley Music and Arts Festival. Treats was followed by Reign of Terror two years later, which spawned the hit song “Comeback Kid.” Shortly after its release, Sleigh Bells made their debut appearance on Saturday Night Live to perform the song along with “End of the Line.” A North American tour followed.

Sleigh Bells’ music has been featured in a number of films and television shows in recent years. The song “Crown on the Ground” was featured in the film Premium Rush and in the opening credits for the film The Bling Ring. “Infinity Guitars” appears in the opening credits for the film Bachelorette and also in the series Girls, and “Rill, Rill” has appeared in the film Pretty Sweet, in the television series Gossip Girl, and in the ads for the new iPhone 5C from Apple.

Most recently, Sleigh Bells released Bitter Rivals, their third album, in the fall of 2013. The band continues to perform and record and has plans for a number of upcoming appearances in the next year.

For more information on booking Sleigh Bells, please contact Booking Entertainment. One of our top booking agents will be happy to work on your behalf to get you the best possible price to book any big name entertainer for your upcoming public, private or corporate event worldwide.

Booking Entertainment works to get the best possible Sleigh Bells booking fee and Sleigh Bells price for our clients while also providing the celebrity or famous entertainer with the level of professionalism and industry norms that they expect from an event run by a professional booking agency and production management.

Booking Entertainment uses our agency / management relationships and over 25 years of production experience to help buyers of headline / top name entertainers and does not claim or represent itself as the exclusive Sleigh Bells agent, manager or management company for any of the artists on our site.

Booking Entertainment does not claim or represent itself as the exclusive booking agency, business manager, publicist, speakers bureau or management for Sleigh Bells or any artists or celebrities on this website.