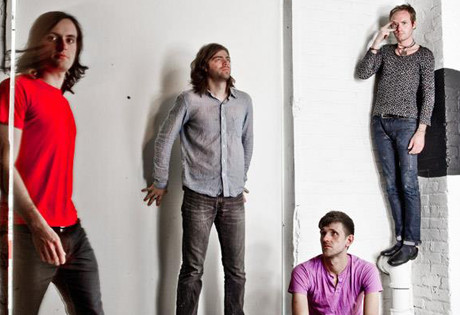 Start by filling out our no-obligation entertainment request form to check pricing and availability for The Faint or whoever else you may want.

Our The Faint agent will be happy to help you get The Faint's availability and booking fee, or the price and availability for any other A-List entertainer, band, comedian or celebrity you may want for your corporate event, private party, wedding, birthday party or public show.

The indie rock group known as The Faint was established in Nebraska in the early 1990’s, founded by members Todd Fink, Joel Peterson, and Clark Baechle, who were skateboarding buddies in their youth. After establishing themselves as a band, The Faint signed to Saddle Creek Records and added Matt Bowen to the lineup just before releasing their debut album, Media, in 1998.

Media was a moderate success, and the Faint launched an extensive tour to further promote their music and expand their fan base. After a few changes to the lineup and a shift to a more techno sound, the Faint released a series of remixes and then the sophomore album Danse Macabre in 2001. The album was followed by Danse Macabre Remixes (2003), Wet from Birth (2004), and Fasciinatiion (2008), which arrived after the Faint established their own record label, black.wav. The albums featured the songs “I Disappear,” “Desperate Guys,” “The Geeks Were Right,” and “Mirror Error.” In addition, the Faint released remixes of the songs “Dance to the Underground” (Radio 4); “We Are Rock” (Joy Electric); “Y Control” ( Yeah Yeah Yeahs); and “Meet Your Master” ( Nine Inch Nails.)

The Faint continues to perform with the current lineup of Fink, Baechle, Jacob Thiele, and Dapose. In addition, Dapose created the death metal band Vverevvolf Grehv in recent years, which has released the album Zombie Aesthetics (2008) on Relapse Records.

Hiring The Faint For Corporate Events, Private Parties And Public Concerts Is Easy With Booking Entertainment

For more information on booking The Faint, please contact Booking Entertainment. One of our top booking agents will be happy to work on your behalf to get you the best possible price to book any big name entertainer for your upcoming public, private or corporate event worldwide.

Booking Entertainment works to get the best possible The Faint booking fee and The Faint price for our clients while also providing the celebrity or famous entertainer with the level of professionalism and industry norms that they expect from an event run by a professional booking agency and production management.

Booking Entertainment uses our agency / management relationships and over 25 years of production experience to help buyers of headline / top name entertainers and does not claim or represent itself as the exclusive The Faint agent, manager or management company for any of the artists on our site.

Booking Entertainment does not claim or represent itself as the exclusive booking agency, business manager, publicist, speakers bureau or management for The Faint or any artists or celebrities on this website.