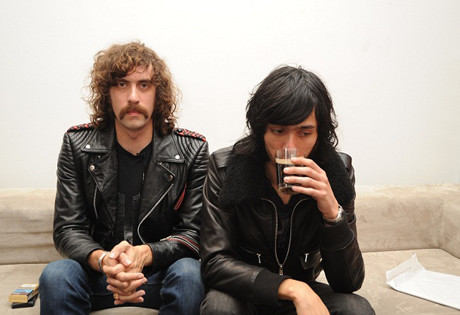 Start by filling out our no-obligation entertainment request form to check pricing and availability for Justice or whoever else you may want.

Our Justice agent will be happy to help you get Justice's availability and booking fee, or the price and availability for any other A-List entertainer, band, comedian or celebrity you may want for your corporate event, private party, wedding, birthday party or public show.

Originally from Paris, France, Justice is made up of two men by the names Gaspard Auge and Xavier de Rosnay. These two began their career in early 2007 releasing their first album together. With this album, Justice was nominated for multiple awards and reached great lengths on many top charts including Best Albums of 2007 and Top 50 Albums of 2007. However, Justice did win a Grammy award for their personal remix to MGMT’s song “Electric Feel.”

With a few years rest, Justice was well on it’s way to producing their second album in 2011. This included a hit single called, “Civiliation,” one of the most popular songs from Justice. With such success, Justice released another album, however, it was a live album called Access All Arenas. This album was a special one because it was released through the Internet on Spotify, their personal website, and other online platforms. The genre for this album, alike most of the music Justice produces, is electronic house and disco house.

Justice is mainly known for their remarkable remixes that they create from other pieces of music. Fore example, Justice created their own remix to Simian’s, “Never Be Alone,” which was produced and performed for college age adults. After becoming such a successful hit, Justice had the privilege to sign a contract to Ed Banger. This song was a sensation all throughout the United States, eventually making its way over the pond to the United Kingdom. Also, this song was played in nightclubs and released on the Internet for fans to listen to.

With such success from one remix Justice created, other artists wanted Justice to create remixes to their music as well. Artists like Fatboy Slim, Britney Spears and Daft Punk had reached out to Justice in the hopes of working together to create a masterpiece.

Being mostly from Europe, Justice was now known internationally, however they still one an award at the Europe Music Awards in 2006 hosted by MTV. Justice was awarded Best Video for this year.

Some festivals Justice has performed in recently include Coachella like many other electronic music artists, Sonar in Barcelona, Parklife in Australia and Pukkelpop in Belgium. On the other side of things, Justice was having issues with people feeling that they were using racism in their music. Justice took this statement seriously and make it clear to their audiences that this was never their intention and that it was the way their fans were personally interpreting Justice’s lyrics.

After the dust settled on that incident, Justice was back to creating hit singles and remixes once again. In 2009, Justice had mixed a fashion show and following the show, their mixes were released on the Internet for the world to listen to.

With their immense talent and success, Justice had won a Grammy that same year, 2009, for Best Remixed Recording of their version of MGMT’s “Electric Feel.” After this, many other artists in the industry were wanting to work with such a successful duo.

For more information on booking Justice, please contact Booking Entertainment. One of our top booking agents will be happy to work on your behalf to get you the best possible price to book any big name entertainer for your upcoming public, private or corporate event worldwide.

Booking Entertainment works to get the best possible Justice booking fee and Justice price for our clients while also providing the celebrity or famous entertainer with the level of professionalism and industry norms that they expect from an event run by a professional booking agency and production management.

Booking Entertainment uses our agency / management relationships and over 25 years of production experience to help buyers of headline / top name entertainers and does not claim or represent itself as the exclusive Justice agent, manager or management company for any of the artists on our site.

Booking Entertainment does not claim or represent itself as the exclusive booking agency, business manager, publicist, speakers bureau or management for Justice or any artists or celebrities on this website.