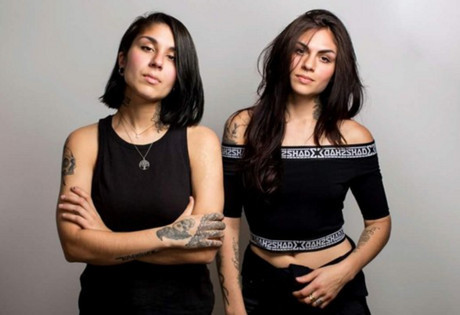 Start by filling out our no-obligation entertainment request form to check pricing and availability for Krewella or whoever else you may want.

Our Krewella agent will be happy to help you get Krewella's availability and booking fee, or the price and availability for any other A-List entertainer, band, comedian or celebrity you may want for your corporate event, private party, wedding, birthday party or public show.

Krewella is a dance duo from the United States. Focusing on electronic dance, the duo is sisters, Jahan and Yasmine Yousaf. A third member of the group, Kristopher Trindl was a small addition for a short amount of time.

Krewella has had numerous extended plays released on the Internet before their first hit single in 2012. In 2013, Krewella released their first album called “Get Wet.” This album included songs like “Live for the Night,” “Alive,” and “Enjoy the Ride.” Krewella performed this album live in 2013 at Ultra Music Festival. These songs helped Krewella get head start on their music career. Krewella works with house music and gives it their personal dance, hip-hop twist.

Interestingly enough, both sisters have a number of tattoos that they share deep meanings with. These tattoos symbolize the day they decided to completely pursue their careers in music and forget everything else. “Killin It” was Krewella’s first and at the time, only, original song released with their album. With this album, the upcoming sensation had topped the charts by getting number one on Billboard’s Dance Radio Airplay.

Continuing their success, Krewella performed at Ultra Music Festival, Electric Daisy Carnival, Sunburn Festival, and many more. With these live performances Krewella’s fan base was growing at a rapid pace. Krewella was awarded the International Dance Music Award for “Best Breakthrough Artist” in 2012. The consistent success did not stop, Krewella decided to pair up with hit sensation Cash Cash in 2013 for their second single, “Live for the Night.” Great job on both parts because this song was such a hit; it is still popular today, three years later!

On the charitable end, Krewella took the opportunity to create bracelets in the hopes of donating money to Dance For Paralysis. This effort helped raise over $15,000 in early 2014. After this milestone, things began to go downhill. The third member of Krewella rebelled against the sisters, filing a lawsuit for millions of dollars. After months of court dates and legal issues, Trindl was officially out of the group and Krewella was now the two sisters. However, as talented artists, from this mess came a hit single “Say Goodbye.” This single ended the fued between the sisters and Trindl putting whatever had happened to rest.

In 2015, Krewella had branched out to participate in a marketing campaign. This opened doors for the sisters, enabling them to market their music along with marketing themselves in Las Vegas. Krewellas’s hit single, “Somewhere to Run” was featured in the campaign.

Some might wonder what Krewella is up to today, and here is your answer. The duo recently announced they are working on a new Extended Play, which is looking to be released by 2016 along with a possible tour. Krewella also has a new song out called “Broken Record,” a catchy techno, hip-hop dance mix. Today, they are currently in the studio working on producing more music to come out later this year. Krewella is an international name that has a lot to live up to. Lets hope they continue to record great music and do not end up in another lawsuit!

For more information on booking Krewella, please contact Booking Entertainment. One of our top booking agents will be happy to work on your behalf to get you the best possible price to book any big name entertainer for your upcoming public, private or corporate event worldwide.

Booking Entertainment works to get the best possible Krewella booking fee and Krewella price for our clients while also providing the celebrity or famous entertainer with the level of professionalism and industry norms that they expect from an event run by a professional booking agency and production management.

Booking Entertainment uses our agency / management relationships and over 25 years of production experience to help buyers of headline / top name entertainers and does not claim or represent itself as the exclusive Krewella agent, manager or management company for any of the artists on our site.

Booking Entertainment does not claim or represent itself as the exclusive booking agency, business manager, publicist, speakers bureau or management for Krewella or any artists or celebrities on this website.