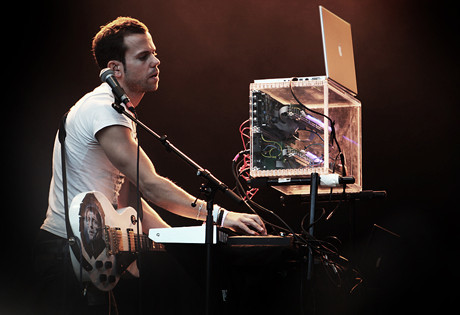 Start by filling out our no-obligation entertainment request form to check pricing and availability for M83 or whoever else you may want.

Wondering how to book M83 for your event? Let Booking Entertainment be Your entertainment booking agency for booking M83 for events worldwide.

Our M83 agent will be happy to help you get M83's availability and booking fee, or the price and availability for any other A-List entertainer, band, comedian or celebrity you may want for your corporate event, private party, wedding, birthday party or public show.

The electronic music project M83 was established in France in 2001, by founding member and producer Anthony Gonzalez. Initially, Gonzalez established M83 in collaboration with fellow musician Nicolas Fromageau, but today M83 is nearly all the writing and recording of Gonzlez with supporting musicians as needed.

M83 arrived on the scene with a self-titled debut album in 2001; the entire endeavor was written and recorded by Gonzlez on an 8-track system while he was still in college. For a number of years, M83 simply remained that single album release, until in 2005 when it was re-released by Mute Records. With the marketing power of a label behind it, it fared much better this time, and was followed by the critically acclaimed album Dead Cities, Red Seas & Lost Ghosts. The albums Before the Dawn Heals Us (2005), Digital Shades Vol. 1 (2007), and Saturdays = Youth (2008) followed, but it was the 2011 album Hurry Up, We’re Dreaming that really put M83 on the map and brought them the commercial success they were seeking.

Hurry Up, We’re Dreaming was an international success, rising into the top forty in five countries and earning M83 its first Grammy nomination for Best Album. The album also spawned the breakthrough hit single, “Midnight City,” and sent M83 on a North American and European tour in support of the album alongside supporting act Active Child. Around the same time, M83 began composing music for the big screen, crafting the acclaimed soundtrack for the 2013 film Oblivion and providing songs such as “I Need You” for the Divergent soundtrack, and “Wait” for the film The Fault in Our Stars. Additionally, the song “Imperfect Circles” was featured in the television series Under the Dome and the song “The World Has Turned and Left Me Here” was featured in the series The Vampire Diaries.

M38 continues to perform and record, both as a solo music act and as a composer for films. M38 released its most recent album, Junk, in 2016. The artist also began writing and composing music for the 2017 production of Cirque de Soleil’s “Volta,” which premiered in Montreal in the spring of 2017.

For more information on booking M83, please contact Booking Entertainment. One of our top booking agents will be happy to work on your behalf to get you the best possible price to book any big name entertainer for your upcoming public, private or corporate event worldwide.

Booking Entertainment works to get the best possible M83 booking fee and M83 price for our clients while also providing the celebrity or famous entertainer with the level of professionalism and industry norms that they expect from an event run by a professional booking agency and production management.

Booking Entertainment uses our agency / management relationships and over 25 years of production experience to help buyers of headline / top name entertainers and does not claim or represent itself as the exclusive M83 agent, manager or management company for any of the artists on our site.

Booking Entertainment does not claim or represent itself as the exclusive booking agency, business manager, publicist, speakers bureau or management for M83 or any artists or celebrities on this website.