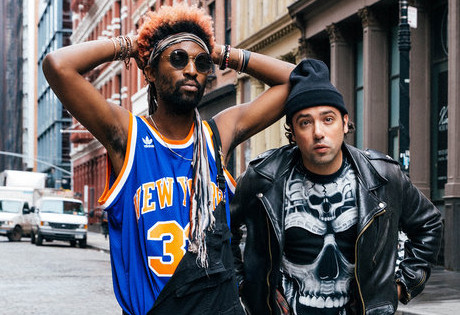 Start by filling out our no-obligation entertainment request form to check pricing and availability for The Knocks or whoever else you may want.

Our The Knocks agent will be happy to help you get The Knocks's availability and booking fee, or the price and availability for any other A-List entertainer, band, comedian or celebrity you may want for your corporate event, private party, wedding, birthday party or public show.

The Knocks is made up of two talented artists, Ben Ruttner and James Patterson. This duo has worked with labels like Atlantic Records and Neon Gold. Catch all of their music for free on Beatport or Spotify, their songs are some you will not want to miss. The Knocks are known for their hit singles “Classic,” “I Wish,” and “ Kiss The Sky.” They got their name from when friends of theirs and neighbors would come by their door and knock because they were being too loud!

Along with working on their own music, The Knocks produced multiple remixes for artists like Ellie Goulding, Britney Spears, Flo Ride and Katy Perry. With this recognition, The Knocks were doing great. Starting out in 2010, The Knocks produced “Dancing with the DJ” and “Here We Go.” After a successful year, nothing was going to stop the dynamic duo.

The Knocks were on a roll and there was only more to come with it. In 2011, The Knocks produced an extended play called “Magic.” This was such a popular hit by The Knocks they were able to gain a new fan base. The Knocks were recognizable to all ages now.

In 2012, lots happened starting with the release of their cover song “Midnight City.” This one is a personal favorite of my own because the beat is so catchy and it honestly makes me want to start singing out loud. I don’t think I was the only one to thoroughly enough that hit because there were thousands of downloads online for it within the first week. Another similar track with the same reaction by fans was “Learn to Fly,” by The Knocks.

As for 2014, The Knocks were in full gear releasing the single “Classic,” that was soon to be played on the computer and video game, The Sims. With more recognition than ever, The Knocks finally released their first and only album thus far, 55, in 2016. This album featured Fetty Wap, Carly Rae Jepson, Alex Newell and X Ambassadors. Because of the success that came from this album, The Knocks went on tour shortly after the release date. It was a short but sweet tour to say the least! It was about a month in length but they made sure to stop at as many cities as possible.
Also in the past year, The Knocks came out with a new remix to one of Taylor Swift’s songs, “Welcome to New York.” This song can also be found online for free download! Another few remixes The Knocks whipped up within the last few months is Carly Rae Jepsen’s “All That,” and Skrillex’s “Where Are U Now,” featuring the popular teen sensation Justin Beiber.

Another accomplishment made by The Knocks would be their original video series “New York Knocks,” a series that told the truth on certain reactions from songs in their album 55.

Hiring The Knocks For Corporate Events, Private Parties And Public Concerts Is Easy With Booking Entertainment

For more information on booking The Knocks, please contact Booking Entertainment. One of our top booking agents will be happy to work on your behalf to get you the best possible price to book any big name entertainer for your upcoming public, private or corporate event worldwide.

Booking Entertainment works to get the best possible The Knocks booking fee and The Knocks price for our clients while also providing the celebrity or famous entertainer with the level of professionalism and industry norms that they expect from an event run by a professional booking agency and production management.

Booking Entertainment uses our agency / management relationships and over 25 years of production experience to help buyers of headline / top name entertainers and does not claim or represent itself as the exclusive The Knocks agent, manager or management company for any of the artists on our site.

Booking Entertainment does not claim or represent itself as the exclusive booking agency, business manager, publicist, speakers bureau or management for The Knocks or any artists or celebrities on this website.