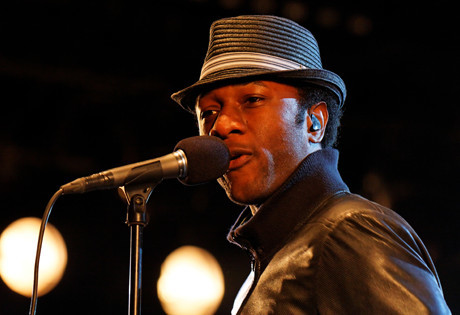 Start by filling out our no-obligation entertainment request form to check pricing and availability for Aloe Blacc or whoever else you may want.

Our Aloe Blacc agent will be happy to help you get Aloe Blacc's availability and booking fee, or the price and availability for any other A-List entertainer, band, comedian or celebrity you may want for your corporate event, private party, wedding, birthday party or public show.

The artist and producer known as Aloe Blacc was born Egbert Nathaniel Dawkins III in 1979 in Southern California. Long before Blacc rose to fame for his vocal word on Avicii’s smash hit “Wake Me Up,” he learned to play trumpet while still in middle school, and later graduated from the University of Southern California to enjoy a brief career in the corporate world. But Aloe’s love of music always beckoned, and in the mid 1990’s, he joined forces with the producer known as Exile, to form the group Emanon.

With Emanon, Blacc went on to enjoy a number of successful albums, including: Steps Through Time (2001), Imaginary Friends (2002), and the Waiting Room (2005.) In 2003, Aloe began work as a solo artist, releasing a few EPs before his full-length solo debut, Shine Through, arrived in 2006. The album was a hit both critically and commercially, and by the late 2000’s, Aloe Blacc was touring extensively, performing both with Emanon and as a solo artist.

By 2010, Aloe Blacc had become well-known for his song “I Need a Dollar,” especially after the single was featured in the HBO series How To Make It in America, as the show’s theme song. During this time Blacc also had a hit with the album Good Things, and with the singles “Green Lights” and “Loving You is Killing Me.” But his success hit an all-time high when he co-wrote and provided the vocal tracks to Avicii’s smash  hit “Wake Me Up, which has become an international sensation, rising to the number one spot in a staggering 103 countries.

Since that time, Aloe Blacc’s star has been on the rise, earning him multiple Brit Award nominations and bringing him to perform at some of the world’s biggest music festivals, including: Glastonbury Festival, Lollapalooza Festival, Montreal Jazz Festival, and the Coachella Valley Music and Arts Festival. Blacc recently released his latest album, Lift Your Spirit, in 2014. It is currently rumored that Aloe Blacc will join the next season of NBC’s show, The Voice, as a guest advisor for Adam Levine’s team.

For more information on booking Aloe Blacc, please contact Booking Entertainment. One of our top booking agents will be happy to work on your behalf to get you the best possible price to book any big name entertainer for your upcoming public, private or corporate event worldwide.

Booking Entertainment works to get the best possible Aloe Blacc booking fee and Aloe Blacc price for our clients while also providing the celebrity or famous entertainer with the level of professionalism and industry norms that they expect from an event run by a professional booking agency and production management.

Booking Entertainment uses our agency / management relationships and over 25 years of production experience to help buyers of headline / top name entertainers and does not claim or represent itself as the exclusive Aloe Blacc agent, manager or management company for any of the artists on our site.

Booking Entertainment does not claim or represent itself as the exclusive booking agency, business manager, publicist, speakers bureau or management for Aloe Blacc or any artists or celebrities on this website.