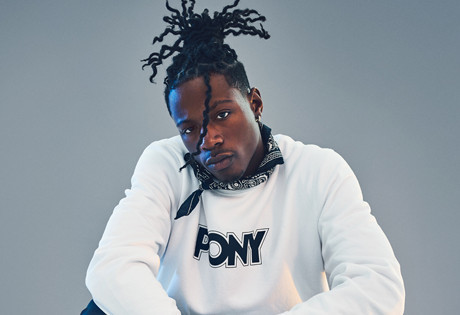 Start by filling out our no-obligation entertainment request form to check pricing and availability for Joey Bada$$ or whoever else you may want.

Our Joey Bada$$ agent will be happy to help you get Joey Bada$$'s availability and booking fee, or the price and availability for any other A-List entertainer, band, comedian or celebrity you may want for your corporate event, private party, wedding, birthday party or public show.

The hip hop artist known as Joey Badass was born Jo-Vaughn Virginie Scott in 1995 in Brooklyn, New York. Joey Badass recently burst onto the scene with his debut mixtape, 1999, in the summer of 2012, and his star is on the rise as one of the era’s most talented artists.

Joey Badass’s family originates from the Caribbean island of St. Lucia, but Joey was the first in the family to be born in the United States. While growing up in Brooklyn, Joey initially harbored a love of acting, and initially began attending Edward R. Murrow High School to study the craft, but switched to music in his freshman year. With a focus on rap, Joey Badass began writing his own lyrics and freestyling, often recording his own performances and posting them to YouTube.

Joey’s talents eventually caught the attention of the Cinematic Music Group, which offered the new artist a management contract. Joey Badass’s debut mixtape, 1999, followed shortly thereafter in 2012, and with the accompanying video for the song “Waves,” Joey began to receive accolades from both critics and fans alike.

Since that time, Joey Badass has also released Summer Knights (2013), featuring the songs “Enter the Void” (with Ab-Soul); “Unorthodox” (with DJ Premier); and “My Yout” (with Collie Buddz.) Joey has been nominated for a Rookie of the Year Award from the BET Hip Hop Awards, and he is currently prepare for his major studio album release, B4.Da.$$, scheduled for later in 2014.

For more information on booking Joey Bada$$, please contact Booking Entertainment. One of our top booking agents will be happy to work on your behalf to get you the best possible price to book any big name entertainer for your upcoming public, private or corporate event worldwide.

Booking Entertainment works to get the best possible Joey Bada$$ booking fee and Joey Bada$$ price for our clients while also providing the celebrity or famous entertainer with the level of professionalism and industry norms that they expect from an event run by a professional booking agency and production management.

Booking Entertainment uses our agency / management relationships and over 25 years of production experience to help buyers of headline / top name entertainers and does not claim or represent itself as the exclusive Joey Bada$$ agent, manager or management company for any of the artists on our site.

Booking Entertainment does not claim or represent itself as the exclusive booking agency, business manager, publicist, speakers bureau or management for Joey Bada$$ or any artists or celebrities on this website.