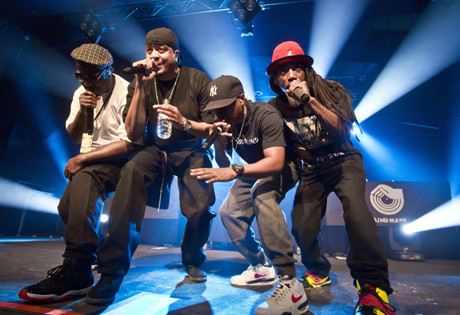 Start by filling out our no-obligation entertainment request form to check pricing and availability for Jurassic 5 or whoever else you may want.

Our Jurassic 5 agent will be happy to help you get Jurassic 5's availability and booking fee, or the price and availability for any other A-List entertainer, band, comedian or celebrity you may want for your corporate event, private party, wedding, birthday party or public show.

Although Jurassic 5 began performing together as a group in 1995, the act didn’t release any original material until 1995, with the debut single “Unified Rebelution.” Two years later, Jurassic 5 released a debut self-titled EP, garnering the attention of Interscope Records.

After signing with the label, the group entered the studio to prepare for their self-titled major label debut, which arrived in 1998 and charted in the United Kingdom but not in the Untied States. But it was Jurassic 5’s sophomore effort, Quality Control, that brought them some attention, rising into the top forty on the mainstream charts and spawning the top twenty rap hits, “Quality Control” and “W.O.E. Is Me (World of Entertainment.)” Next came Power in Numbers (2002) and Feedback (2006), but in 2007 Jurassic 5 disbanded.

Jurassic 5 recently resurfaced in 2013, appearing for the first time in six years in performance at the Coachella Valley Music and Arts Festival. Since then, Jurassic 5 has started to record and release some new music, and in 2015 the group performed at the Blues and Roots Festival Byron Bay Australia. More new material and tour dates are expected in the coming years.

For more information on booking Jurassic 5, please contact Booking Entertainment. One of our top booking agents will be happy to work on your behalf to get you the best possible price to book any big name entertainer for your upcoming public, private or corporate event worldwide.

Booking Entertainment works to get the best possible Jurassic 5 booking fee and Jurassic 5 price for our clients while also providing the celebrity or famous entertainer with the level of professionalism and industry norms that they expect from an event run by a professional booking agency and production management.

Booking Entertainment uses our agency / management relationships and over 25 years of production experience to help buyers of headline / top name entertainers and does not claim or represent itself as the exclusive Jurassic 5 agent, manager or management company for any of the artists on our site.

Booking Entertainment does not claim or represent itself as the exclusive booking agency, business manager, publicist, speakers bureau or management for Jurassic 5 or any artists or celebrities on this website.