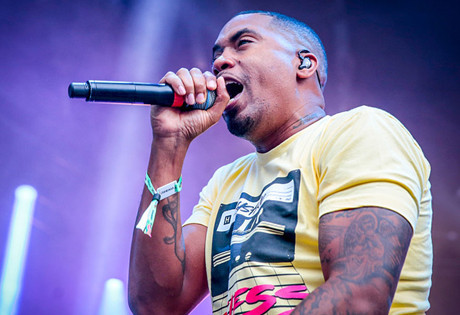 Start by filling out our no-obligation entertainment request form to check pricing and availability for Nas or whoever else you may want.

Wondering how to book Nas for your event? Let Booking Entertainment be Your entertainment booking agency for booking Nas for events worldwide.

Our Nas agent will be happy to help you get Nas's availability and booking fee, or the price and availability for any other A-List entertainer, band, comedian or celebrity you may want for your corporate event, private party, wedding, birthday party or public show.

The American hip-hop artist known as Nas was born Nasir bin Olu Dara Jones in 1973 in Brooklyn, New York. That Nas would grow up to become a musician is no surprise, as his father is a well-known jazz and blues musician. While growing up in the Queens area of New York, Nas was influenced not only by his father’s music, but also by the burgeoning hip-hop scene of the area.

After dropping out of school in the late 1980’s, Nas established a friendship with the producer Large Professor, who would grant him studio time to start recording some of his own material. After signing with Columbia Records in 1994, Nas released his solo album, Illmatic, and the work immediately garnered him significant critical acclaim and commercial success. Boasting contributions by not only Large Professor, but also Q-Tip, DJ Premiere, and Pete Rock, Illmatic was praised by publications and stations such as The Source and Shaheem Reid of MTV News, who tapped Illmatic as “the first classic LP” for the year.

For his musical achievements, Nas has been recognized with eleven Grammy Award nominations and many other industry awards. Nas is often listed as among the greatest hip-hop artists of the era; MTV ranks him at number five on their Greatest MCs of All Time.

For more information on booking Nas, please contact Booking Entertainment. One of our top booking agents will be happy to work on your behalf to get you the best possible price to book any big name entertainer for your upcoming public, private or corporate event worldwide.

Booking Entertainment works to get the best possible Nas booking fee and Nas price for our clients while also providing the celebrity or famous entertainer with the level of professionalism and industry norms that they expect from an event run by a professional booking agency and production management.

Booking Entertainment uses our agency / management relationships and over 25 years of production experience to help buyers of headline / top name entertainers and does not claim or represent itself as the exclusive Nas agent, manager or management company for any of the artists on our site.

Booking Entertainment does not claim or represent itself as the exclusive booking agency, business manager, publicist, speakers bureau or management for Nas or any artists or celebrities on this website.