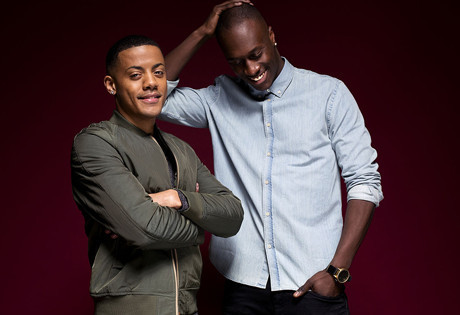 Start by filling out our no-obligation entertainment request form to check pricing and availability for Nico and Vinz or whoever else you may want.

Our Nico and Vinz agent will be happy to help you get Nico and Vinz's availability and booking fee, or the price and availability for any other A-List entertainer, band, comedian or celebrity you may want for your corporate event, private party, wedding, birthday party or public show.

The Norwegian singing duo known as Nico & Vinz was established in 2009, founded by Vincent Dery and Kahouly Sereba. Nico & Vinz recently burst onto the music scene with their international hit, “Am I Wrong” in 2014, but the duo has been recording and performing since 2011, originally under the name Envy.

As Envy, Nico & Vinz made their debut appearance in 2011 at the Emergenza Festival, and the performance garnered them significant buzz. Shortly thereafter, the duo released “One Song,” their debut single, which quickly rose into the top twenty on the charts in Norway and charted internationally. The debut album, The Magic soup and the Bittersweet Faces, followed in 2012, featuring “One Song” and the follow up single, “Go Loud.” But it was in 2013 that the duo experienced their big breakthrough when, although still performing under the name Envy, Nico & Vinz released the song “Am I Wrong.”

The single was an immediate success, garnering the attention of Warner Bros. Records and earning Nico & Vinz their first major record deal. After signing with Warner Bros., the duo officially changed their name to Nico & Vinz and re-released the single in the United States. “Am I Wrong” rose into the top five on the mainstream charts, becoming one of the most frequently played singles of April 2014.

Nico & Vinz have since released a sophomore album, Black Star Elephant, which arrived in late 2014. The album features the song “When the Day Comes,” which also rose to the top of the charts after its release. Nico & Vinz are just getting started, and definitely a duo on the rise; they are expected to launch a tour in the coming year, and fans also anticipate a return to the studio for another album in the near future.

For more information on booking Nico and Vinz, please contact Booking Entertainment. One of our top booking agents will be happy to work on your behalf to get you the best possible price to book any big name entertainer for your upcoming public, private or corporate event worldwide.

Booking Entertainment works to get the best possible Nico and Vinz booking fee and Nico and Vinz price for our clients while also providing the celebrity or famous entertainer with the level of professionalism and industry norms that they expect from an event run by a professional booking agency and production management.

Booking Entertainment uses our agency / management relationships and over 25 years of production experience to help buyers of headline / top name entertainers and does not claim or represent itself as the exclusive Nico and Vinz agent, manager or management company for any of the artists on our site.

Booking Entertainment does not claim or represent itself as the exclusive booking agency, business manager, publicist, speakers bureau or management for Nico and Vinz or any artists or celebrities on this website.