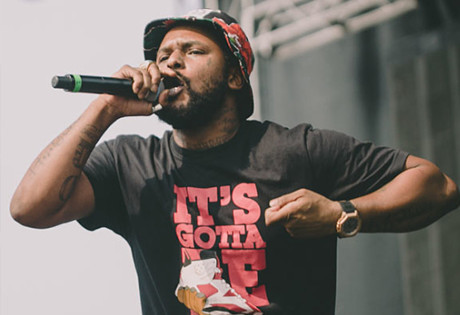 Start by filling out our no-obligation entertainment request form to check pricing and availability for Schoolboy Q or whoever else you may want.

Our Schoolboy Q agent will be happy to help you get Schoolboy Q's availability and booking fee, or the price and availability for any other A-List entertainer, band, comedian or celebrity you may want for your corporate event, private party, wedding, birthday party or public show.

The artist known as Schoolboy Q was born Quincey Matthew Hanley in 1986 on a military base in Germany. Hanley grew up in Los Angeles, California, though, and as a teenager he was initially inspired by a love of football which brought him to university studies. His strong educational background led to the moniker Schoolboy Q, but before he could embark on a career as a musician, he found himself sidetracked by the lure of easy money and crime.

After serving a short period of time in jail for dealing drugs, Schoolboy Q was determined to take his early love of hip hop and turn it into a positive career. In the mid 2000’s, he joined Top Dawg Entertainment and began to prepare his debut. The result was the mixtape Schoolboy Turned Hustla, released in 2008. The mixtape garnered the attention of Interscope Records, which signed Schoolboy Q in 2011.

Since that time, Schoolboy Q has released the albums Setbacks (2011) and Habits & Contradictions (2012), featuring the hip-hop hits “Yay Yay,” “Collard Greens,” “Man of the Year,” “Break the Bank,” and “Studio,” which featured BJ the Chicago Kid and which not only rose into the top ten on the hip hop charts, but also into the top forty on the mainstream charts. Schoolboy Q has also collaborated as a featured performer on a number of other singles, including: “Flight Confirmation” (with The Alchemist); “Kidz with Gunz” (with Skeme); “Work” (with ASAP Rocky and French Montana); “All My Niggas” (with E-40); “White Walls” (with Macklemore & Ryan Lewis); and “2 On” (with Tinashe.)

Most recently, Schoolboy Q released his album Oxymoron (2014), which debuted at number one on the charts. He also recently appeared to perform as the musical guest on Jimmy Kimmel Live!, and sold out two shows in Las Vegas. Clearly Schoolboy Q’s career is on the rise, and he is definitely a hip hop artist to watch.

For more information on booking Schoolboy Q, please contact Booking Entertainment. One of our top booking agents will be happy to work on your behalf to get you the best possible price to book any big name entertainer for your upcoming public, private or corporate event worldwide.

Booking Entertainment works to get the best possible Schoolboy Q booking fee and Schoolboy Q price for our clients while also providing the celebrity or famous entertainer with the level of professionalism and industry norms that they expect from an event run by a professional booking agency and production management.

Booking Entertainment uses our agency / management relationships and over 25 years of production experience to help buyers of headline / top name entertainers and does not claim or represent itself as the exclusive Schoolboy Q agent, manager or management company for any of the artists on our site.

Booking Entertainment does not claim or represent itself as the exclusive booking agency, business manager, publicist, speakers bureau or management for Schoolboy Q or any artists or celebrities on this website.