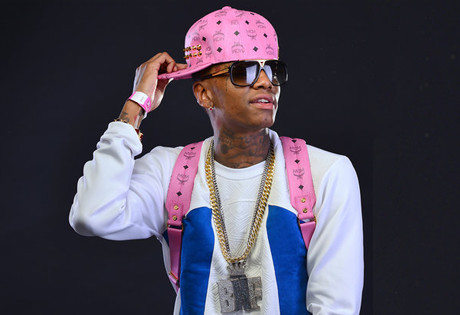 Start by filling out our no-obligation entertainment request form to check pricing and availability for Soulja Boy or whoever else you may want.

Our Soulja Boy agent will be happy to help you get Soulja Boy's availability and booking fee, or the price and availability for any other A-List entertainer, band, comedian or celebrity you may want for your corporate event, private party, wedding, birthday party or public show.

The American rapper known as Soulja Boy was born DeAndre Cortez Way in 1990 in Chicago. DeAndre spent his elementary school years growing up in Atlanta, where he was inspired by the rap music scene of the city. After moving to Mississippi at the age of fourteen, Way found support from his father, who encouraged his musical interests and provided him with a home-spun recording system to begin creating his music.

By the mid 2000’s, DeAndre had started to post his works under the name Soulja Boy on Myspace, YouTube, and various other online forums. By 2007, Soulja Boy had released his first independently produced album, Unsigned & Still Major: Da Album Before da Album, featuring the single “Crank That (Soulja Boy.)” After the song began to garner some airplay, Soulja Boy signed his first deal with Interscope Records, launching his career.

Since that time, Soulja Boy has released the additional albums: Souljaboytellem.com (2007), iSouljaBoyTellem (2008), and The DeAndre Way (2010.) The albums spawned the additional charting songs: “Soulja Girl,” “Yahhh!,” “Donk,” “Bird Walk,” “ Kiss Me Thru the Phone” (featuring Sammie), “Turn My Swag On,” “Pretty Boy Swag,” and Speakers Going Hammer.” Soulja Boy has also provided vocals for the singles: “Clumsy” (for Fergie); “Marco Polo” (for Bow Wow); “LOL” (for Trey Songz); “Bingo” (for Gucci Mane), “Turn It Up” (for Wanessa); and “Brazil We Flexing” (for MC Guime.)

Soulja Boy recently left his major record label and released his first independent album since the start of his career. Loyalty arrived in 2015, and another album is expecting within the coming year. Soulja Boy also recently lent his vocals to the single “Yasss Bish,” in collaboration with Nicki Minaj.

For more information on booking Soulja Boy, please contact Booking Entertainment. One of our top booking agents will be happy to work on your behalf to get you the best possible price to book any big name entertainer for your upcoming public, private or corporate event worldwide.

Booking Entertainment works to get the best possible Soulja Boy booking fee and Soulja Boy price for our clients while also providing the celebrity or famous entertainer with the level of professionalism and industry norms that they expect from an event run by a professional booking agency and production management.

Booking Entertainment uses our agency / management relationships and over 25 years of production experience to help buyers of headline / top name entertainers and does not claim or represent itself as the exclusive Soulja Boy agent, manager or management company for any of the artists on our site.

Booking Entertainment does not claim or represent itself as the exclusive booking agency, business manager, publicist, speakers bureau or management for Soulja Boy or any artists or celebrities on this website.