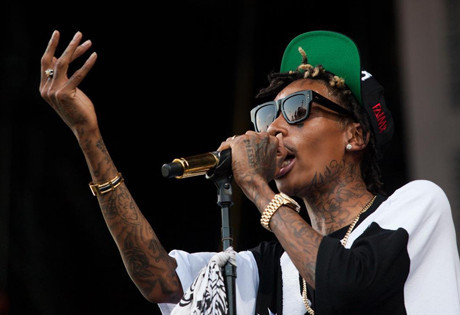 Start by filling out our no-obligation entertainment request form to check pricing and availability for Wiz Khalifa or whoever else you may want.

Our Wiz Khalifa agent will be happy to help you get Wiz Khalifa's availability and booking fee, or the price and availability for any other A-List entertainer, band, comedian or celebrity you may want for your corporate event, private party, wedding, birthday party or public show.

The American rapper known as Wiz Kahlifa was born Cameron Jibril Thomaz in 1987 in Minot, North Dakota. Young Cameron moved around frequently due to his parents military service obligations, living in various cities across the United States, Germany, and Japan. While spending his teenage years in Philadelphia, Thomaz began rapping and writing his own music, collaborating with local rising artists on their mixtapes. After a representative from Rostrum Records got wind of his talents, Cameron teamed up with him, adopting the moniker Wiz Khalifa.

Between 2005 and 2008, Wiz Khalifa released a series of mixtapes and a debut album, Show and Prove. The album earned Khalifa critical acclaim from such industry publications as Rolling Stone, which tapped the rising rap star as an “artist to watch” in the coming year. By 2007, Khalifa had signed to Warner Bros. Records, releasing a number of singles, including “Say Yeah” and “Better Off Alone,” both of which rose into the top forty on the mainstream charts.

By 2009, Wiz Khalifa had left Warner Bros. Records to sign with Atlantic Records, releasing his next album, Deal or No Deal, with the label in 2009. But it was the album Rolling Papers that became Wiz Khalifa’s biggest mainstream breakthrough, rising to the number one spot on the R&B/hip-hop charts and also the rap charts, and into the number two spot on the mainstream charts.

Since that time, Wiz Khalifa has released the additional albums: Rolling Papers (2011), O.N.I.F.C. (2012), and Blacc Hollywood (2014), all of which performed as well as Rolling Papers. Blacc Hollywood topped its success, rising to the number one spot on all three charts. Notable singles from Wiz Khalifa include: “Black and Yellow,” “Roll Up,” “On My Level,” “No Sleep,” “Young, Wild & Free,” “We Own It,” “We Dem Boyz,” and the smash-hit single “See You Again,” recorded with Charlie Puth and which appeared on the Furious 7 Soundtrack. The song rose to the number one spot on nearly every chart in the United States and also internationally, and earned Wiz Khalifa dozens of industry award nominations, including an American Music Award nomination for Collaboration of the Year, a Golden Globe nomination for Best Original Song, and Grammy Award nominations for Song of the Year, Best Pop Duo/Group Performance, and Best Song Written for a Visual Medium.

Wiz Khalifa continues to perform and record. His most recent album, Khalifa, was released in 2016 and rose into the top five on the R&B/hip-hop, rap, and mainstream charts in the United States.

For more information on booking Wiz Khalifa, please contact Booking Entertainment. One of our top booking agents will be happy to work on your behalf to get you the best possible price to book any big name entertainer for your upcoming public, private or corporate event worldwide.

Booking Entertainment works to get the best possible Wiz Khalifa booking fee and Wiz Khalifa price for our clients while also providing the celebrity or famous entertainer with the level of professionalism and industry norms that they expect from an event run by a professional booking agency and production management.

Booking Entertainment uses our agency / management relationships and over 25 years of production experience to help buyers of headline / top name entertainers and does not claim or represent itself as the exclusive Wiz Khalifa agent, manager or management company for any of the artists on our site.

Booking Entertainment does not claim or represent itself as the exclusive booking agency, business manager, publicist, speakers bureau or management for Wiz Khalifa or any artists or celebrities on this website.