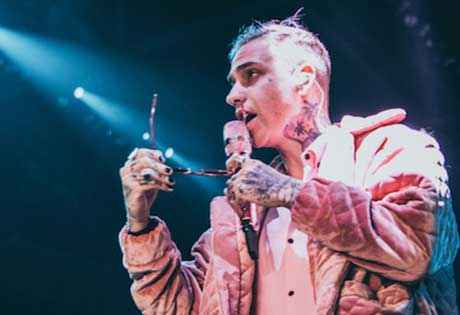 Start by filling out our no-obligation entertainment request form to check pricing and availability for Blackbear or whoever else you may want.

Our Blackbear agent will be happy to help you get Blackbear's availability and booking fee, or the price and availability for any other A-List entertainer, band, comedian or celebrity you may want for your corporate event, private party, wedding, birthday party or public show.

Blackbear is an American rapper and producer born Matthew Tyler Musto in 1990. He was born in Pittston, Pennsylvania, but raised in Palm Coast, Florida. In high school, Blackbear joined a rock band and released a series of projects, which caused him to drop out of high school in his first year. He left the band after a couple of years and moved to Atlanta to work with Ne-Yo in 2008.

Blackbear would put out a string of EPs in 2008, 2009, and 2010. He changed his name and released his first single in late 2011 entitled “Marauder Music.” He helped Justin Bieber write “Boyfriend” in 2012 and soon after Blackbear began dropping music on Soundcloud. By 2015 he released his debut album Deadroses, which garnered critical acclaim and millions of streams. He released a handful of projects over the next few years, including his breakout album Digital Druglord in 2017 under Alamo Records.

For more information on booking Blackbear, please contact Booking Entertainment. One of our top booking agents will be happy to work on your behalf to get you the best possible price to book any big name entertainer for your upcoming public, private or corporate event worldwide.

Booking Entertainment works to get the best possible Blackbear booking fee and Blackbear price for our clients while also providing the celebrity or famous entertainer with the level of professionalism and industry norms that they expect from an event run by a professional booking agency and production management.

Booking Entertainment uses our agency / management relationships and over 25 years of production experience to help buyers of headline / top name entertainers and does not claim or represent itself as the exclusive Blackbear agent, manager or management company for any of the artists on our site.

Booking Entertainment does not claim or represent itself as the exclusive booking agency, business manager, publicist, speakers bureau or management for Blackbear or any artists or celebrities on this website.