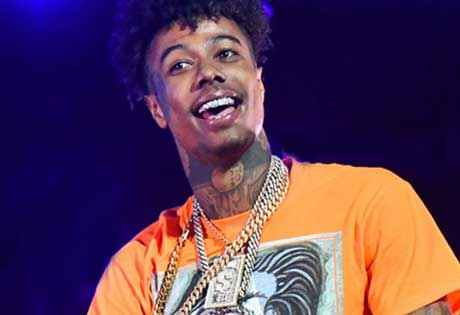 Start by filling out our no-obligation entertainment request form to check pricing and availability for Blueface or whoever else you may want.

Our Blueface agent will be happy to help you get Blueface's availability and booking fee, or the price and availability for any other A-List entertainer, band, comedian or celebrity you may want for your corporate event, private party, wedding, birthday party or public show.

Blueface is an American rapper born Johnathan Michael Porter in 1997. He was born in Los Angeles, California, but was raised specifically in West Los Angeles while living in Santa Clarita Valley with his mother before moving to Oakland with his father. Blueface had a very successful football career at quarterback which led him to a scholarship in college, but by 2016 he had stopped. In 2017, he began making music and after a chance encounter at a studio in Los Angeles, he began working with producer Laudrino. He released “Dead Locs” and followed it up with his first project in 2018 entitled Famous Cryp. His next EP, Two Coccy, was dropped later that year.

With the release of Blueface’s video for “Respect My Crypn,” he gained viral status and soon found his old records receiving newfound attention. He was quickly signed to Cash Money West and found his stock rising. “Thotiana” debuted at #75 on the Billboard Hot 100. Blueface dropped remixed with YG and Cardi B, and this further increased his popularity leading into his next single “Stop Cappin.”

Blueface is preparing to drop his debut album Find the Beat in 2020. He has released two singles thus far: “Close Up” with Jeremih and “First Class” with Gunna.

For more information on booking Blueface, please contact Booking Entertainment. One of our top booking agents will be happy to work on your behalf to get you the best possible price to book any big name entertainer for your upcoming public, private or corporate event worldwide.

Booking Entertainment works to get the best possible Blueface booking fee and Blueface price for our clients while also providing the celebrity or famous entertainer with the level of professionalism and industry norms that they expect from an event run by a professional booking agency and production management.

Booking Entertainment uses our agency / management relationships and over 25 years of production experience to help buyers of headline / top name entertainers and does not claim or represent itself as the exclusive Blueface agent, manager or management company for any of the artists on our site.

Booking Entertainment does not claim or represent itself as the exclusive booking agency, business manager, publicist, speakers bureau or management for Blueface or any artists or celebrities on this website.