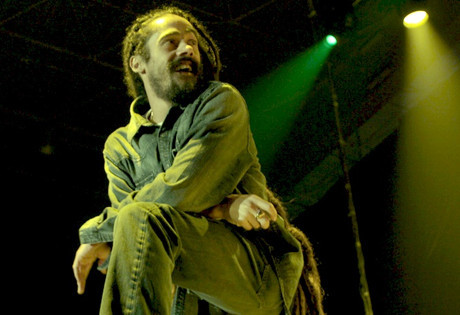 Start by filling out our no-obligation entertainment request form to check pricing and availability for Damian Marley or whoever else you may want.

Our Damian Marley agent will be happy to help you get Damian Marley's availability and booking fee, or the price and availability for any other A-List entertainer, band, comedian or celebrity you may want for your corporate event, private party, wedding, birthday party or public show.

As the son of legendary musician Bob Marley, it was no surprise that Damian Marley would likely grow up to become an accomplished musician in his own right. Born in 1978 in Jamaica, Damian sadly lost his father when he was only two years old. His mother, Cindy Breakspeare, encouraged Damian’s interest in music, and so he began performing while still a young teenager. By the age of thirteen, Damian had formed his first musical group, although the endeavor was short-lived.

In 1996, Damian Marley launched his own career as a solo artist, releasing the debut Mr. Marley. The album was followed by Halfway Tree, which gave Damien his first critical acclaim and accolade; the album earned Marley a Grammy Award for Best Reggae Album in 2002. But it was the album Jamrock which became Damian’s biggest breakthrough, rising not only to the number one spot on the reggae charts, but also into the number three spot on the rap charts, number four on the R&B charts, and number seven on the US mainstream charts.

Since Jamrock, Damian Marley has released the additional albums: Distant Relatives (2010), SuperHeavy (2011), Set UP Shop Vol. 1 (2013), and Set Up Shop Vol. 2 (2014.) Notable singles from the albums include: “Welcome to Jamrock,” “The Master Has come Back”; “Road to Zion” (featuring Nas); “Beautiful” (featuring Bobby Brown); “All Night” (featuring Damian’s brother, Stephen Marley); “Now That You Got It” (featuring Gwen Stefani); and “Make It Bun Dem” (featuring Skrillex.)

Damien Marley continues to perform and record. His most recent album, Set Up Shop Vol. 3, was released in 2015.

For more information on booking Damian Marley, please contact Booking Entertainment. One of our top booking agents will be happy to work on your behalf to get you the best possible price to book any big name entertainer for your upcoming public, private or corporate event worldwide.

Booking Entertainment works to get the best possible Damian Marley booking fee and Damian Marley price for our clients while also providing the celebrity or famous entertainer with the level of professionalism and industry norms that they expect from an event run by a professional booking agency and production management.

Booking Entertainment uses our agency / management relationships and over 25 years of production experience to help buyers of headline / top name entertainers and does not claim or represent itself as the exclusive Damian Marley agent, manager or management company for any of the artists on our site.

Booking Entertainment does not claim or represent itself as the exclusive booking agency, business manager, publicist, speakers bureau or management for Damian Marley or any artists or celebrities on this website.