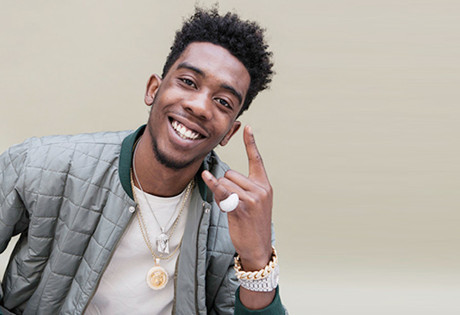 Start by filling out our no-obligation entertainment request form to check pricing and availability for Desiigner or whoever else you may want.

Our Desiigner agent will be happy to help you get Desiigner's availability and booking fee, or the price and availability for any other A-List entertainer, band, comedian or celebrity you may want for your corporate event, private party, wedding, birthday party or public show.

The American rapper known as Desiigner was born Sidney Royel Selby III in 1997. Desiigner grew up in the Brooklyn area of New York; that he would wish to enter the entertainment field as a musician is no surprise, since his grandfather is blues artist Sidney “Guitar Crusher” Selby. Inspired and influenced by the elder Sidney, Desiigner began singing in the local church choir when he was a young child; by the time he was in his teens, he had started recording and distributing demos.

Desiigner released his debut single, “Zombie Walk,” in 2015, followed by his breakthrough single, “Panda.” “Panda” was an enormous success, rising to the number one spot on the rap, hip-hop, and even mainstream charts in the United States. The single earned Desiigner a recording contract through Kanye West’s GOOD Music, via Def Jam Recordings, and a spot performing at the 2016 South by Southwest music festival.

Since that time, Desiigner has released a debut mixtape, New English, which rose to the top twenty on both the mainstream and R&B/hip-hop charts in the United States. “Panda” and New English have so far earned Desiigner two 2017 Billboard Music Awards, for Top Rap Song and Top Streaming Song, in addition to a Grammy nomination for Best Rap Performance. In addition to “Panda,” Desiigner has also recently appeared as a guest artist on singles by numerous other artists, including Phresher (“On the Low” and “Danny DeVito”); Tyga (“Gucci Snakes”) and Kanye West (“Pt 2.”)

Desiigner is clearly a young rap star on the rise and one to watch in the coming years. His debut album, The Life of Desiigner, is scheduled for release in late 2017. Desiigner most recently appeared as a guest artist on Logan Paul’s single, “The Song of the Summer.”

For more information on booking Desiigner, please contact Booking Entertainment. One of our top booking agents will be happy to work on your behalf to get you the best possible price to book any big name entertainer for your upcoming public, private or corporate event worldwide.

Booking Entertainment works to get the best possible Desiigner booking fee and Desiigner price for our clients while also providing the celebrity or famous entertainer with the level of professionalism and industry norms that they expect from an event run by a professional booking agency and production management.

Booking Entertainment uses our agency / management relationships and over 25 years of production experience to help buyers of headline / top name entertainers and does not claim or represent itself as the exclusive Desiigner agent, manager or management company for any of the artists on our site.

Booking Entertainment does not claim or represent itself as the exclusive booking agency, business manager, publicist, speakers bureau or management for Desiigner or any artists or celebrities on this website.