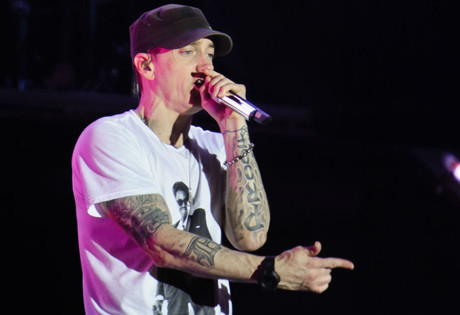 Start by filling out our no-obligation entertainment request form to check pricing and availability for Eminem or whoever else you may want.

Our Eminem agent will be happy to help you get Eminem's availability and booking fee, or the price and availability for any other A-List entertainer, band, comedian or celebrity you may want for your corporate event, private party, wedding, birthday party or public show.

Iconic American rapper Eminem was born Marshall Bruce Mathers III in 1972 in St. Joseph, Missouri. Marshall and his single mother struggled to get by when he was a child, shuffling between family members’ homes and moving around frequently, and so Mathers had a difficult time connecting with classmates and establishing long-term relationships. He found solace in storytelling, initially harboring fantasies of becoming a comic-book artist, until he discovered the medium of hip-hop as a means to express himself.

Marshall began rapping with friends when he was about fourteen; it was at this time that he developed the moniker Eminem. After dropping out of school, he began to perform frequently at open-mic contests in the Detroit area, teaming up with Proof and four other rappers to form his first group, The Dirty Dozen (D12.) Although The Dirty Dozen had some success with their first album, Devil’s Night, Eminem attracted independent record labels for his potential as a solo artist, and so after signing with Web Entertainment, he recorded and released his debut album, Infinite, in 1996.

Infinite was a commercial failure, but he regrouped and developed a new concept – the alter-ego of Slim Shady. Through Slim Shady, Eminem began to write and record lyrics that explored themes such as violence, sexuality, drugs, and emotional instability, leading to the EP that would become his major breakthrough – the Slim Shady EP.

Slim Shady garnered Eminem the attention of Interscope Records, and after signing with the label, he re-released Slim Shady as an LP in 1999. The album rose to triple platinum status and launched a career for Eminem which has lasted well into the new millennium and made the performer one of the most iconic rappers of his generation and the best-selling artist of the 2000’s. It also earned him his first Grammy Award for Best Rap Album.

Thus far in his career, Eminem has scored five number-one singles on the mainstream charts and ten number-one albums. His record sales near two hundred million albums and he ranks on Rolling Stone’s 100 Greatest Artists of All Time. Notable albums from Eminem include The Marshall Mathers LP (2000), Encore (2004), Relapse (2009), Recovery (2010), and The Marshall Mathers LP 2 (2013.) Chart-topping singles include: “The Real Slim Shady,” “Stan,” “Without Me,” “Lose Yourself,” “Just Lose It,” “We Made You,” “Not Afraid,” and the songs “Love the Way You Lie” and “The Monster,” both recorded in collaboration with Rhianna. So far, Eminem has won fifteen Grammy Awards for his music, and one Academy Award for Best Original Song (for “Lose Yourself,” which appears in the loosely autobiographical film, 8 Mile.)

For more information on booking Eminem, please contact Booking Entertainment. One of our top booking agents will be happy to work on your behalf to get you the best possible price to book any big name entertainer for your upcoming public, private or corporate event worldwide.

Booking Entertainment works to get the best possible Eminem booking fee and Eminem price for our clients while also providing the celebrity or famous entertainer with the level of professionalism and industry norms that they expect from an event run by a professional booking agency and production management.

Booking Entertainment uses our agency / management relationships and over 25 years of production experience to help buyers of headline / top name entertainers and does not claim or represent itself as the exclusive Eminem agent, manager or management company for any of the artists on our site.

Booking Entertainment does not claim or represent itself as the exclusive booking agency, business manager, publicist, speakers bureau or management for Eminem or any artists or celebrities on this website.