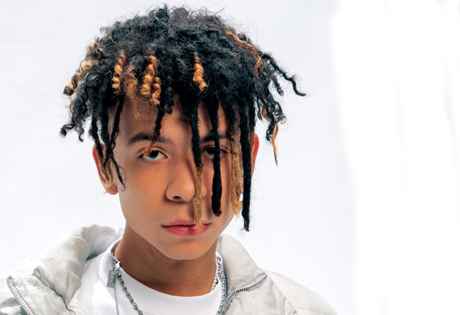 Our Iann Dior agent will be happy to help you get Iann Dior's availability and booking fee, or the price and availability for any other A-List entertainer, band, comedian or celebrity you may want for your corporate event, private party, wedding, birthday party or public show.

Iann Dior is a Puerto Rican entertainer and performer born in 1991. He was born in Arecibo, Puerto Rico, but moved to and was raised in Corpus Christi, Texas. He would grow up in a strict household and be punished for listening to explicit music before deciding to make the music himself. He was discovered in 2019 by Internet Money Records.
Iann Dior would begin uploading songs to Soundcloud and gain a considerable amount of traction on the Internet. His debut album, Industry Plant, would perform well with critics as he was featured in several major publications including Genius, Billboard, and many more. In 2020, Iann Dior would collaborate with fellow emcee 24kGoldn on the record “Mood,” which was a breakout record for both young artists as it peaked on numerous charts and was featured heavily on social media apps and streaming platforms.
Dior’s debut studio album would peak at #51 on the Canadian charts and #44 on the Billboard 200 chart. His debut EP would peak at #37 on the Canadian charts and #45 on the Billboard 200 charts. Dior has had two Gold certified solo singles with “Gone Girl” and “Prospect,” with the latter peaking at #8 on the US Bubbling Under Hot 100 chart. His collaboration with 24kGoldn, “Mood,” would top the Billboard Hot 100 chart as well as the charts in Australia, Canada, Ireland, Sweden, and many more.
Iann Dior recently released his second EP, Still Here, to critical acclaim, with notable singles garnering praise such as "Don’t Wanna Believe" and "Shot in the Dark" with Trippier Redd.

For more information on booking Iann Dior, please contact Booking Entertainment. One of our top booking agents will be happy to work on your behalf to get you the best possible price to book any big name entertainer for your upcoming public, private or corporate event worldwide.

Booking Entertainment works to get the best possible Iann Dior booking fee and Iann Dior price for our clients while also providing the celebrity or famous entertainer with the level of professionalism and industry norms that they expect from an event run by a professional booking agency and production management.

Booking Entertainment uses our agency / management relationships and over 25 years of production experience to help buyers of headline / top name entertainers and does not claim or represent itself as the exclusive Iann Dior agent, manager or management company for any of the artists on our site.

Booking Entertainment does not claim or represent itself as the exclusive booking agency, business manager, publicist, speakers bureau or management for Iann Dior or any artists or celebrities on this website.