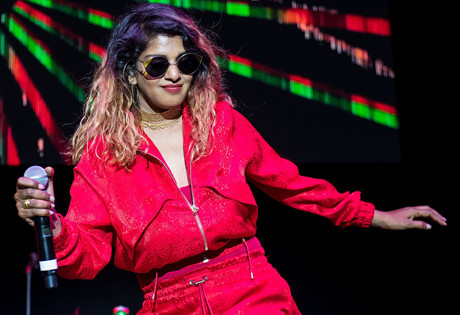 Start by filling out our no-obligation entertainment request form to check pricing and availability for MIA or whoever else you may want.

Wondering how to book MIA for your event? Let Booking Entertainment be Your entertainment booking agency for booking MIA for events worldwide.

Our MIA agent will be happy to help you get MIA's availability and booking fee, or the price and availability for any other A-List entertainer, band, comedian or celebrity you may want for your corporate event, private party, wedding, birthday party or public show.

The British rapper and performer known as M.I.A. was born Mathangi “Maya” Arulpragasam in 1985 in Hounslow, West London but spent her childhood years growing up in Sri Lanka during a politically tumultuous time for the island nation. After returning to London for her teenage years, Maya graduated from high school and then enrolled in London’s Central Saint Martins College of Art and Design, with an intent to pursue film and the fine arts.

Initially, Maya became known for her achievements as a visual artist and designer, but by the mid 2000’s she had adopted the moniker M.I.A. and launched a recording career, starting with the hit singles “Sunshowers” and “Galang.” Her first two albums, Arular (2005) and Kala (2007) both met with critical acclaim and commercial success, charting internationally and reaching into the top twenty on the independent charts in the United States.

Between 2007 and 2013, M.I.A. released the additional albums Maya (2010) and Matangi (2013.) Additional notable singles from M.I.A. include “Paper Planes,” “XXXO,” “Bad Girls,” and “Bring the Noize.” She also appeared as a featured artist on Madonna’s chart-topping hit, “Give Me All Your Luvin,” and contributed the song “O… Saya” to the soundtrack for the 2009 film Slumdog Millionaire. M.I.A. has so far received nominations for Academy Awards, Grammy Awards, and Brit Awards, in addition to numerous other industry award nominations.

In 2009, Time Magazine listed M.I.A. as one of the world’s most influential people. Her extensive support for charities and philanthropic endeavors include organizations which seek to help global communities break from poverty and violence, and charities which fund medical research.

M.I.A. continues to perform and record. Her most recent album, AIM, arrived in 2016, featuring the song “Poc Still A Ryda.”

For more information on booking MIA, please contact Booking Entertainment. One of our top booking agents will be happy to work on your behalf to get you the best possible price to book any big name entertainer for your upcoming public, private or corporate event worldwide.

Booking Entertainment works to get the best possible MIA booking fee and MIA price for our clients while also providing the celebrity or famous entertainer with the level of professionalism and industry norms that they expect from an event run by a professional booking agency and production management.

Booking Entertainment uses our agency / management relationships and over 25 years of production experience to help buyers of headline / top name entertainers and does not claim or represent itself as the exclusive MIA agent, manager or management company for any of the artists on our site.

Booking Entertainment does not claim or represent itself as the exclusive booking agency, business manager, publicist, speakers bureau or management for MIA or any artists or celebrities on this website.