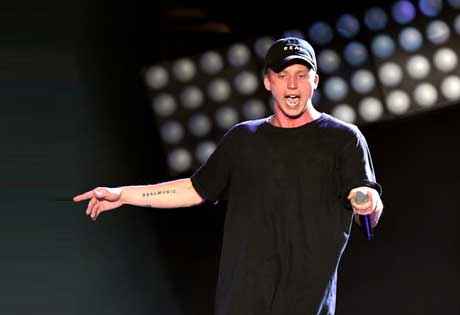 Start by filling out our no-obligation entertainment request form to check pricing and availability for NF or whoever else you may want.

Wondering how to book NF for your event? Let Booking Entertainment be Your entertainment booking agency for booking NF for events worldwide.

Our NF agent will be happy to help you get NF's availability and booking fee, or the price and availability for any other A-List entertainer, band, comedian or celebrity you may want for your corporate event, private party, wedding, birthday party or public show.

NF is an American rapper and songwriter born Nathan Feuerstein in 1991. He was born and raised in Gladwin, Michigan, and dealt with an abusive mother and step-dad before his father took custody of him. After she died of an overdose he dedicated the song “How Could You Leave Us” to her. NF graduated that year as well from Gladwin High School and started rapping at the Fine Arts Festival in Canton, Michigan. He viewed rap as an escape, and in 2010 he released his debut album Moments and his debut single “Alone” the following year. He signed with Xist Music in 2012 and dropped his debut EP I’m Free to much critical acclaim. He left the label before his next project released and delayed his next EP, NF.

In 2014, NF inked a deal with Capitol Christian Music Group and released the project that same year. He finally charted on Billboard on their Christian Albums chart, peaking at #12 there, #4 on the Gospel Albums chart, and #15 on the Rap Albums chart. Many publications reviewed the project well, and he released his first album under his new label in 2015, entitled Mansion. His music was then featured in digital media including Madden NFL 16 and Empire. NF’s second album, Therapy Session, dropped in 2016 and saw more single placements in digital media. His third album, Perception, debuted at #1 on the Billboard 200 in 2017. The single “Let You Down” was his first song to chart on the Hot 100 and he later toured with fellow rappers Logic and Kyle the following year.

2019 treated the rapper well, as NF released his latest project The Search to much acclaim. Recently, NF dropped his latest single “Paid My Dues,” and an accompanying music video. A tour for the album is also scheduled.

For more information on booking NF, please contact Booking Entertainment. One of our top booking agents will be happy to work on your behalf to get you the best possible price to book any big name entertainer for your upcoming public, private or corporate event worldwide.

Booking Entertainment works to get the best possible NF booking fee and NF price for our clients while also providing the celebrity or famous entertainer with the level of professionalism and industry norms that they expect from an event run by a professional booking agency and production management.

Booking Entertainment uses our agency / management relationships and over 25 years of production experience to help buyers of headline / top name entertainers and does not claim or represent itself as the exclusive NF agent, manager or management company for any of the artists on our site.

Booking Entertainment does not claim or represent itself as the exclusive booking agency, business manager, publicist, speakers bureau or management for NF or any artists or celebrities on this website.