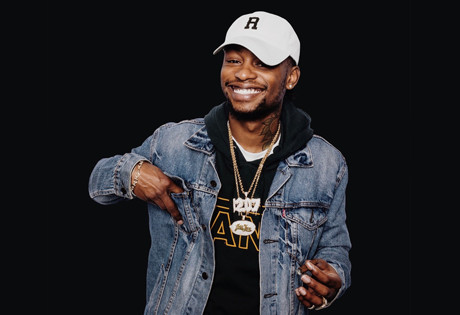 Start by filling out our no-obligation entertainment request form to check pricing and availability for Rob $tone or whoever else you may want.

Our Rob $tone agent will be happy to help you get Rob $tone's availability and booking fee, or the price and availability for any other A-List entertainer, band, comedian or celebrity you may want for your corporate event, private party, wedding, birthday party or public show.

The American rapper known as Rob $tone was born Jaylen Robinson in 1995 in San Diego. As a child, Jaylen was enamored with his father’s extensive music collection, which featured everything from pop and rock to R&B and reggae. Although fascinated with the music industry as a child, Jaylen did not learn to rap until he was in Atlanta, Georgia attending college.

By 2014, Rob $Tone had released his first song, “Chill Bill,” via his SoundCloud account. His early works began to garner some traction, and so he compiled enough original material to record his debut mixtape, Straight Bummin’, which arrived in 2015. To $tone’s surprise and pleasure, the single “Chill Bill” grew in popularity, prompting him to record the song for YouTube and release the song as a debut single on the market. “Chill Bill” slowly began its climb up the mainstream chart, ultimately reaching all the way to number twenty-nine on the mainstream and into the top ten on the R&B and rap charts. The song has even sparked a remix featuring rappers Cousin Stizz, Denzel Curry, and D.R.A.M.

Although Rob $tone is a new artist just getting started, he’s clearly one to keep an eye on in the coming year. $tone recently released his second mixtape, I’m Almost Ready—we can assume that the title is an indication of great things to come next.

For more information on booking Rob $tone, please contact Booking Entertainment. One of our top booking agents will be happy to work on your behalf to get you the best possible price to book any big name entertainer for your upcoming public, private or corporate event worldwide.

Booking Entertainment works to get the best possible Rob $tone booking fee and Rob $tone price for our clients while also providing the celebrity or famous entertainer with the level of professionalism and industry norms that they expect from an event run by a professional booking agency and production management.

Booking Entertainment uses our agency / management relationships and over 25 years of production experience to help buyers of headline / top name entertainers and does not claim or represent itself as the exclusive Rob $tone agent, manager or management company for any of the artists on our site.

Booking Entertainment does not claim or represent itself as the exclusive booking agency, business manager, publicist, speakers bureau or management for Rob $tone or any artists or celebrities on this website.