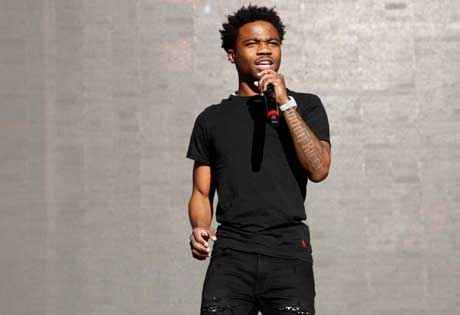 Start by filling out our no-obligation entertainment request form to check pricing and availability for Roddy Ricch or whoever else you may want.

Our Roddy Ricch agent will be happy to help you get Roddy Ricch's availability and booking fee, or the price and availability for any other A-List entertainer, band, comedian or celebrity you may want for your corporate event, private party, wedding, birthday party or public show.

Roddy Ricch is an American rapper born Rodrick Wayne Moore Jr. in 1998. He was born and raised in Compton, California, but also spent time in Atlanta, Georgia, when young. He began rapping at age 8 and began producing beats at age 16. In late 2017 Roddy released his debut mixtape, Feed Tha Streets, and it earned praise from many rappers including Meek Mill and Nipsey Hussle. His debut EP Be 4 Tha Fame was released the following year and he performed alongside Nipsey as a guest at a major Los Angeles show.

During the summer of 2018, Roddy released the single “Die Young,” written after fellow rapper XXXTentacion’s death. It quickly garnered millions of views on YouTube and Spotify. He followed the track up with “Project Dreams” and was featured on Nipsey Hussle’s last single “Racks In The Middle.” A bidding war ensued for the young rapper and it was heavily speculated Meek Mill would sign Roddy Ricch due to the gifting of a Dreamchasers chain during a Philadelphia show. He would later ink a deal with Atlantic and release Feed Tha Streets II.

Roddy Ricch ended the year with the release of his debut album, Please Excuse Me for Being Antisocial. It debuted at #1 on the Billboard 200 and Roddy is preparing to embark on an accompanying tour soon.

For more information on booking Roddy Ricch, please contact Booking Entertainment. One of our top booking agents will be happy to work on your behalf to get you the best possible price to book any big name entertainer for your upcoming public, private or corporate event worldwide.

Booking Entertainment works to get the best possible Roddy Ricch booking fee and Roddy Ricch price for our clients while also providing the celebrity or famous entertainer with the level of professionalism and industry norms that they expect from an event run by a professional booking agency and production management.

Booking Entertainment uses our agency / management relationships and over 25 years of production experience to help buyers of headline / top name entertainers and does not claim or represent itself as the exclusive Roddy Ricch agent, manager or management company for any of the artists on our site.

Booking Entertainment does not claim or represent itself as the exclusive booking agency, business manager, publicist, speakers bureau or management for Roddy Ricch or any artists or celebrities on this website.