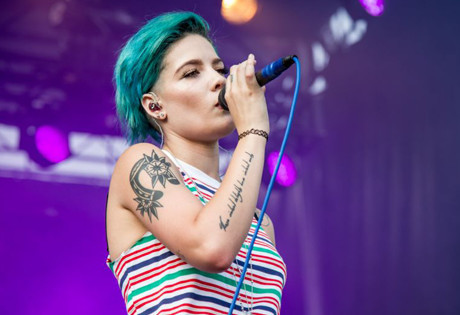 Start by filling out our no-obligation entertainment request form to check pricing and availability for Halsey or whoever else you may want.

Our Halsey agent will be happy to help you get Halsey's availability and booking fee, or the price and availability for any other A-List entertainer, band, comedian or celebrity you may want for your corporate event, private party, wedding, birthday party or public show.

Halsey is an American singer and songwriter born Ashley Nicolette Frangipane in 1994. She was born and raised in Edison, New Jersey, and began writing her own lyrics in 2011 when she went through a major relationship. Halsey soon left college and was homeless in New York City while trying to find direction in her life before posting cover videos to YouTube and Tumblr.

Halsey eventually met people in the industry in 2014 and released her debut single “ Ghost,” which quickly caught on and garnered her many record label offers. She released her debut EP Room 93 later that year and it garnered great critical acclaim. By 2015 Halsey’s debut studio album Badlands hit the shelves and garnered her a strong fan base and many more career opportunities. Her 2017 follow-up Hopeless Fountain Kingdom did well critically.

Halsey’s two studio projects thus far have peaked at #2 and #1 on the Billboard 200 chart, respectively. Both albums were certified Platinum and charted well in foreign countries opening her up to an international audience. Her breakout single “ Ghost” was certified Platinum, and she later would release “Bad at Love,” which peaked at #5 and was certified quadruple Platinum. Halsey’s most successful single, 2018’s “Without Me,” would be certified sextuple Platinum and top the Billboard Hot 100.

Halsey is set to release her third studio album Maniac in 2020, and has released a series of singles for it, including the Gold-certified single “Graveyard.”

For more information on booking Halsey, please contact Booking Entertainment. One of our top booking agents will be happy to work on your behalf to get you the best possible price to book any big name entertainer for your upcoming public, private or corporate event worldwide.

Booking Entertainment works to get the best possible Halsey booking fee and Halsey price for our clients while also providing the celebrity or famous entertainer with the level of professionalism and industry norms that they expect from an event run by a professional booking agency and production management.

Booking Entertainment uses our agency / management relationships and over 25 years of production experience to help buyers of headline / top name entertainers and does not claim or represent itself as the exclusive Halsey agent, manager or management company for any of the artists on our site.

Booking Entertainment does not claim or represent itself as the exclusive booking agency, business manager, publicist, speakers bureau or management for Halsey or any artists or celebrities on this website.