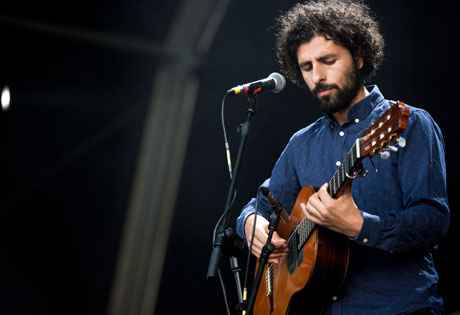 Start by filling out our no-obligation entertainment request form to check pricing and availability for Jose Gonzalez or whoever else you may want.

Our Jose Gonzalez agent will be happy to help you get Jose Gonzalez's availability and booking fee, or the price and availability for any other A-List entertainer, band, comedian or celebrity you may want for your corporate event, private party, wedding, birthday party or public show.

Indie folk singer and songwriter Jose Gonzalez was born in 1978 in Sweden. Jose’s family fled Argentina two years before he was born, during a time when the country was faced with what is known today as the “Dirty War.” Young Jose was then born in Gothenburg, where he grew up listening to pop and Latin folk music, absorbing his influences from artists such as Silvio Rodriguez.

After graduating from high school, Gonzalez at first attended the University of Gothenburg with intentions to pursue a Ph.D. in Biochemistry. While in college, Jose joined the band Back Against the Wall, playing guitar for the hardcore punk group. However, during his time with the band, he continued to write his own music, and in 2003 he self-released a debut single. A chance meeting with a representative of Imperial Records then led to his first record deal, and Jose’s career took off.

After his debut album, Veneer, rose into the top ten in Sweden and the UK and earned him a Swedish Grammy for Best New Artist, Gonzalez left his Ph.D. program to pursue a career in music full time. The rest, as they say, is history. Today, Jose Gonzalez is best known for his gentle vocal melodies and unique classical guitar sound. His debut album was followed by the albums In Our Nature (2007) and Vestiges & Claws (2015), the latter of which became Jose’s first to chart in the United States. Notable singles from the albums include “ Heartbeats,” “Crosses,” “Hand on Your  Heart,” and “Down the Line.”

In addition to his own albums, Jose Gonzalez has also provided music for a number of other projects, including ones for the Ministry of Sound and for the film The Secret Life of Walter Mitty. In 2010, Gonzalez was the subject of the documentary The Extraordinary Ordinary Life of Jose Gonzalez. Gonzalez is currently preparing material for his next studio album, expected in the coming year.

For more information on booking Jose Gonzalez, please contact Booking Entertainment. One of our top booking agents will be happy to work on your behalf to get you the best possible price to book any big name entertainer for your upcoming public, private or corporate event worldwide.

Booking Entertainment works to get the best possible Jose Gonzalez booking fee and Jose Gonzalez price for our clients while also providing the celebrity or famous entertainer with the level of professionalism and industry norms that they expect from an event run by a professional booking agency and production management.

Booking Entertainment uses our agency / management relationships and over 25 years of production experience to help buyers of headline / top name entertainers and does not claim or represent itself as the exclusive Jose Gonzalez agent, manager or management company for any of the artists on our site.

Booking Entertainment does not claim or represent itself as the exclusive booking agency, business manager, publicist, speakers bureau or management for Jose Gonzalez or any artists or celebrities on this website.