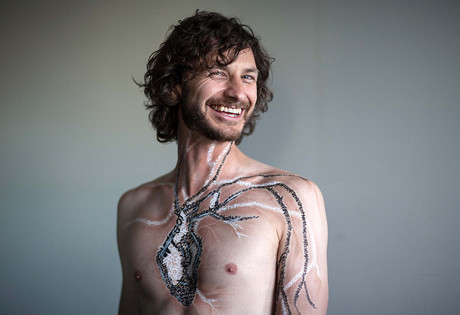 Somebody That I Used to Know
Hearts a Mess
Easy Way Out
Eyes Wide Open
State of the Art
Smoke and Mirrors
What Do You Want?
The Only Thing I Know
Save Me
Seven Hours With a Backseat Driver
Giving Me A Chance
Bronte

Start by filling out our no-obligation entertainment request form to check pricing and availability for Gotye or whoever else you may want.

Somebody That I Used to Know
Hearts a Mess
Easy Way Out
Eyes Wide Open
State of the Art
Smoke and Mirrors
What Do You Want?
The Only Thing I Know
Save Me
Seven Hours With a Backseat Driver
Giving Me A Chance
Bronte

Our Gotye agent will be happy to help you get Gotye's availability and booking fee, or the price and availability for any other A-List entertainer, band, comedian or celebrity you may want for your corporate event, private party, wedding, birthday party or public show.

The Australian producer, instrumentalist, singer, and composer known as Gotye was born Wouter De Backer in 1980 in Belgium. Gotye moved to Australia with his family at the age of two, settling in the Melbourne area, where he developed a deep love of music. Goyte learned to play the drums and piano first, and by the time he was in high school, he’d started performing with some friends.

After earning his Bachelor of Arts from the University of Melbourne, Gotye wrote and recorded his earliest material in 2001, assembling his first four-track CD and self-distributing a few dozen copies. Local DJs and radio stations in Australia took notice, and encouraged Goyte to continue writing, recording, and producing.

Goyte released his debut album, Boardface, in 2003, to moderate success. But it was his second album, Like Drawing Blood, that truly put Gotye on the map upon its release in 2006. The album earned the artist a Most Outstanding New Independent Artist recognition at the Australia Independent Record Chart Awards and an ARIA Award for Best Male Artist. The album spawned the singles “Learnalilgivinanlovin” and “Hearts a Mess,” bringing the album to platinum status in Australia and setting the stage for Gotye’s biggest breakthrough.

While Gotye’s second album, Mixed Blood, was also highly successful, earning him multiple ARIA Music Award nominations, his biggest international breakthrough came with the single “Somebody That I Used to Know,” recorded with Kimbra, in 2011. The single earned Goyte ARIA Awards for Single of the Year, Producer of the Year, and Best Male Artist, in addition to his first Grammy Awards, for Record of the Year and Best Pop Duo/Group Performance. The single also reached the number one spot on the mainstream charts in the United States, making Gotye one of the few Australian artists to achieve that level of success in America.

Gotye is definitely an artist still on the rise after his big breakthrough. Much more is expected of him in the coming years, including his next studio album, set for release sometime soon.

For more information on booking Gotye, please contact Booking Entertainment. One of our top booking agents will be happy to work on your behalf to get you the best possible price to book any big name entertainer for your upcoming public, private or corporate event worldwide.

Booking Entertainment works to get the best possible Gotye booking fee and Gotye price for our clients while also providing the celebrity or famous entertainer with the level of professionalism and industry norms that they expect from an event run by a professional booking agency and production management.

Booking Entertainment uses our agency / management relationships and over 25 years of production experience to help buyers of headline / top name entertainers and does not claim or represent itself as the exclusive Gotye agent, manager or management company for any of the artists on our site.

Booking Entertainment does not claim or represent itself as the exclusive booking agency, business manager, publicist, speakers bureau or management for Gotye or any artists or celebrities on this website.