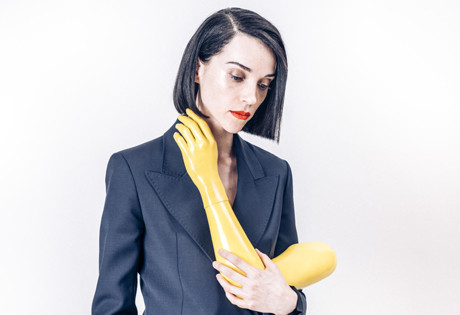 Start by filling out our no-obligation entertainment request form to check pricing and availability for St. Vincent or whoever else you may want.

Our St. Vincent agent will be happy to help you get St. Vincent's availability and booking fee, or the price and availability for any other A-List entertainer, band, comedian or celebrity you may want for your corporate event, private party, wedding, birthday party or public show.

The artist known as St. Vincent was born Anne Erin Clark in 1982 in Oklaholma. Clark was born in the Tulsa area but moved to Dallas, Texas when she was seven years old, following her parents’ divorce. Anne began playing guitar when she was in elementary school, and got her first experiences on the road alongside her aunt and uncle, the duo behind the vocal jazz group Tuck & Patti.

After graduating from high school, Clark continued her studies in music at the Berklee College of Music in Boston, during which time she released her first EP, a collaborative effort with some classmates. Anne grew weary of the conventional classroom approach to music study, however, and so she returned to Texas and joined a number of small bands and orchestras before deciding to pursue a career as a solo artist.

Under the moniker St. Vincent, Clark released her debut album, Marry Me, in 2007. The work earned her accolades and praise from some of the most prestigious music publications, and also earned her three PLUG Independent Music Award nominations. Marry Me was followed by Actor (2009), becoming St. Vincent’s first album to chart, but it was her fourth album, the self-titled St. Vincent, that truly put her on the map.

St. Vincent earned the artist a Grammy Award for Best Alternative Album and the album itself was tapped as album of the year by multiple magainzes, including Slant Magazine, Entertainment Weekly, and The Guardian. St. Vincent also earned the Vanguard Award at the ASCAP Pop Music Awards, and a Brit Award nomination for International Female Solo Artist.

St. Vincent is an artist on the rise for certain. In addition to her own studio albums and singles, she composed “The Antidote” and “Roslyn” for two of the Twilight Saga films, and provided the song “Early Autumn” for the Gangster Squad soundtrack. Her song “Make Believe” is also featured on Boardwalk Empire Volume 2: Music from the HBO Original Series. St. Vincent most recently announced her fall tour for 2017; the Fear the Future tour coincides with her latest album and is expected to run through the end of the year.

For more information on booking St. Vincent, please contact Booking Entertainment. One of our top booking agents will be happy to work on your behalf to get you the best possible price to book any big name entertainer for your upcoming public, private or corporate event worldwide.

Booking Entertainment works to get the best possible St. Vincent booking fee and St. Vincent price for our clients while also providing the celebrity or famous entertainer with the level of professionalism and industry norms that they expect from an event run by a professional booking agency and production management.

Booking Entertainment uses our agency / management relationships and over 25 years of production experience to help buyers of headline / top name entertainers and does not claim or represent itself as the exclusive St. Vincent agent, manager or management company for any of the artists on our site.

Booking Entertainment does not claim or represent itself as the exclusive booking agency, business manager, publicist, speakers bureau or management for St. Vincent or any artists or celebrities on this website.