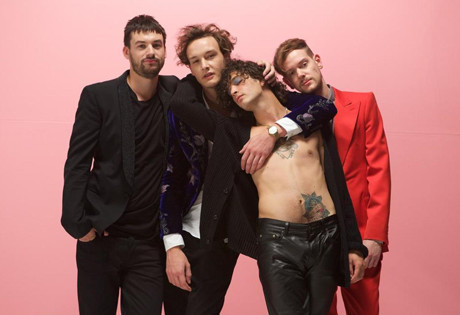 Hiring The 1975 For Corporate Events, Appearances, Speaking Engagements and Product Endorsements Is Easy With Booking Entertainment

Booking Entertainment can also help you book The 1975 for private virtual appearances,  live-streams or virtual shows.

Start by filling out our no-obligation entertainment request form to check pricing and availability for The 1975 or whoever else you may want.

Our The 1975 agent will be happy to help you get The 1975's availability and booking fee, or the price and availability for any other A-List entertainer, band, comedian or celebrity you may want for your corporate event, private party, wedding, birthday party or public show.

The English rock band known as The 1975 originated in Manchester, established by founding members George Daniel, Ross MacDonald, Adam Hann, and Matthew Healy. The musicians initially met in high school, and began performing together in the early 2000’s when they were still teenagers. Inspired by the poetry of Jack Kerouac, the group finally settled on the name The 1975 after trying dozens of others.

The 1975 released their debut EP, Facedown, in 2012 and they began to receive some local airplay in the UK, plus a feature spot on BBC Radio 1. After signing with Polydor, the band released a self-titled debut album to great success – The 1975 rose to the number one spot in the UK and also charted in the top ten or top twenty internationally. The band scored their first top twenty hits in the United States, with the singles “Chocolate” and “Girls.” Other notable singles from the album include: Sex,” “Settle Down,” “Medicine,” “Love Me,” and “UGH!”

The 1975 followed their breakthrough album with an even more successful one – I Like It When You Sleep, for You Are So Beautiful Yet So Unaware of It (2016.) This time, not only did the album bring the band two hit singles - “Somebody Else” and “The Sound” – but also the 2017 Brit Award for Best British Group.

The 1975 continues to perform and record with their original lineup. The group is currently working on new material for their next album, Music for Cards, which they have confirmed is scheduled for release in early 2018.

Hiring The 1975 For Corporate Events, Private Parties And Public Concerts Is Easy With Booking Entertainment

For more information on booking The 1975, please contact Booking Entertainment. One of our top booking agents will be happy to work on your behalf to get you the best possible price to book any big name entertainer for your upcoming public, private or corporate event worldwide.

Booking Entertainment works to get the best possible The 1975 booking fee and The 1975 price for our clients while also providing the celebrity or famous entertainer with the level of professionalism and industry norms that they expect from an event run by a professional booking agency and production management.

Booking Entertainment uses our agency / management relationships and over 25 years of production experience to help buyers of headline / top name entertainers and does not claim or represent itself as the exclusive The 1975 agent, manager or management company for any of the artists on our site.

Booking Entertainment does not claim or represent itself as the exclusive booking agency, business manager, publicist, speakers bureau or management for The 1975 or any artists or celebrities on this website.