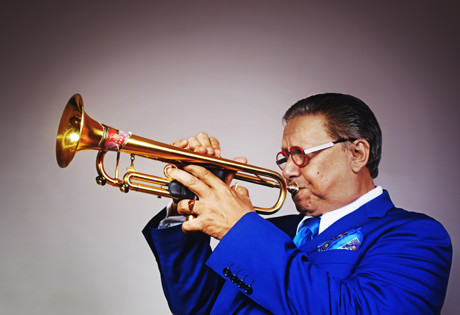 Start by filling out our no-obligation entertainment request form to check pricing and availability for Arturo Sandoval or whoever else you may want.

Our Arturo Sandoval agent will be happy to help you get Arturo Sandoval's availability and booking fee, or the price and availability for any other A-List entertainer, band, comedian or celebrity you may want for your corporate event, private party, wedding, birthday party or public show.

Arturo Sandoval was born in 1949 in Cuba. Young Arturo fell in love with jazz and the trumpet while he was still a teenager, and studied the instrument classically until he was drafted into the military in the early 1970’s. Although his years in service disrupted an ability to launch a career as a musician, Sandoval continued to practice and play and in the late 1970’s he formed the band Irakere and caught the attention of Columbia Records.

Although Arturo recorded with Irakere until the early 1980’s, he left Irakere in 1981 and struck out on his own, touring worldwide and performing alongside some of the world’s most renowned symphony orchestras. Since that time, Arturo  Sandoval has continued his career as a jazz trumpeter well into the new millennium, recording dozens of albums and performing live, often alongside such notables as Celine Dion, Alicia Keys, Kenny G, Gloria Estefan, and even Justin Timberlake.

Sandoval’s albums recorded with Dizzy Gillespie (including To a Finland Station, 1982, and Live at the Royal Festival Hall, 1990) are among his most famous, and his relationship with Gillespie has been among the most important to him personally. Dizzy Gillespie even inadvertently assisted Arturo Sandoval’s American citizenship, by bringing him on tour with him in the early 1990’s, at point at when Sandoval defected in Spain and became a naturalized American citizen in 1999. In 2016, Arturo Sandoval opened the Arturo Sandoval Jazz Club in Miami Beach, and although it was only open for two years, it featured such notable performers as Roberta Flack, Michael Lington, and Joshua Redman.

Thus far in his career, Arturo Sandoval has earned seventeen Grammy nominations with nine wins. His life story was the subject of a 2000 television film (For Love or Country: The Arturo Sandoval Story), and in 2013, he was the recipient of the Presidential Medal of Freedom.

For more information on booking Arturo Sandoval, please contact Booking Entertainment. One of our top booking agents will be happy to work on your behalf to get you the best possible price to book any big name entertainer for your upcoming public, private or corporate event worldwide.

Booking Entertainment works to get the best possible Arturo Sandoval booking fee and Arturo Sandoval price for our clients while also providing the celebrity or famous entertainer with the level of professionalism and industry norms that they expect from an event run by a professional booking agency and production management.

Booking Entertainment uses our agency / management relationships and over 25 years of production experience to help buyers of headline / top name entertainers and does not claim or represent itself as the exclusive Arturo Sandoval agent, manager or management company for any of the artists on our site.

Booking Entertainment does not claim or represent itself as the exclusive booking agency, business manager, publicist, speakers bureau or management for Arturo Sandoval or any artists or celebrities on this website.