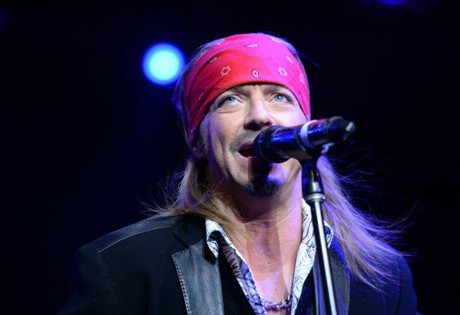 Start by filling out our no-obligation entertainment request form to check pricing and availability for Bret Michaels or whoever else you may want.

Our Bret Michaels agent will be happy to help you get Bret Michaels's availability and booking fee, or the price and availability for any other A-List entertainer, band, comedian or celebrity you may want for your corporate event, private party, wedding, birthday party or public show.

Bret Michaels was born Bret Michael Sychak in 1963 in Butler, Pennsylvania. While still a teenager, young Bret began playing the guitar, and by the time he was twenty, he had formed his first band, Paris, with some friends. In 1984, Bret and his band mates, Bobby Dall, Matt Smith, and Rikki Rockett, moved to Los Angeles and changed the band name to Poison. Matt Smith left the band and returned to Pennsylvania, but Brett, Dall, and Rockett forged forward, adding C.C. DeVille to the band.

Poison performed around the Los Angeles area and established a local following. Eventually they landed a record deal and released their debut album, Look What the Cat Dragged In. The album didn’t hit the charts until 1987, however, after Bret Michaels convinced the band members to craft a video to accompany the single “Talk Dirty To Me.” Once the video aired, the album went platinum, and Poison rocketed to stardom. A painful breakup with his then girlfriend also prompted Bret Michaels to craft the single “Every Rose Has Its Thorn” shortly after, which not only also hit the top of the charts, but became one of the most iconic rock ballads of the decade.

For the next two decades, Poison dominated the charts and became one of the world’s top selling “glam metal” bands. By the dawn of the new millennium, Bret Michaels had launched his own solo career, and he managed both this endeavor and his commitment to Poison for the next decade. A Letter from Death Row was released 1998, followed by Ballads, Blues, & Stories in 2001. Songs of Life came next in 2003, featuring the hit singles “Bittersweet,” “Raine,” and “One More Day.” Rock My World, followed in 2008, featuring the singles “Start Again,” “Fallen,” and “Go That Far.”

In addition to his music endeavors, around the same time Bret Michaels began his first season of Rock of Love with Bret Michaels, a VH1 reality show which sought to pair Bret with a suitable girlfriend. The show was a hit, and since the first season’s relationship didn’t last, it was renewed for a second season. The failing of that pairing led to a third season in 2009, which was even more successful than the first two. Michaels then competed on The Celebrity Apprentice: All Stars in 2013.

Bret Michaels continues to perform and record. He released Custom Built in 2010, featuring the singles “Nothing to Lose” and “Wasted Time.” The album peaked at number one on the Hard Rock and Independent charts, becoming Michaels’s best selling solo album to date. In 2013, he followed-up with the album Jammin’ with Friends.  Most recently, Bret Michaels released the very personal single “Jorja Bleu,” a tribute to his youngest daughter.

For more information on booking Bret Michaels, please contact Booking Entertainment. One of our top booking agents will be happy to work on your behalf to get you the best possible price to book any big name entertainer for your upcoming public, private or corporate event worldwide.

Booking Entertainment works to get the best possible Bret Michaels booking fee and Bret Michaels price for our clients while also providing the celebrity or famous entertainer with the level of professionalism and industry norms that they expect from an event run by a professional booking agency and production management.

Booking Entertainment uses our agency / management relationships and over 25 years of production experience to help buyers of headline / top name entertainers and does not claim or represent itself as the exclusive Bret Michaels agent, manager or management company for any of the artists on our site.

Booking Entertainment does not claim or represent itself as the exclusive booking agency, business manager, publicist, speakers bureau or management for Bret Michaels or any artists or celebrities on this website.