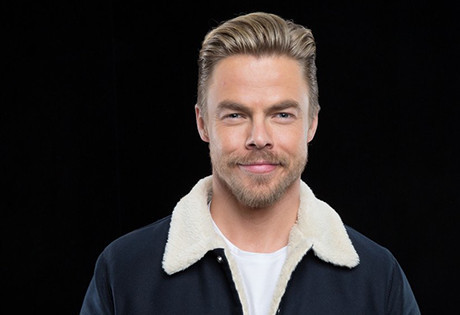 Start by filling out our no-obligation entertainment request form to check pricing and availability for Derek Hough or whoever else you may want.

Our Derek Hough agent will be happy to help you get Derek Hough's availability and booking fee, or the price and availability for any other A-List entertainer, band, comedian or celebrity you may want for your corporate event, private party, wedding, birthday party or public show.

The American dancer Derek Hough was born in 1985 in Sandy, Utah. Derek is the fourth of five children in a Mormon family, but he was also born into a family of dancers; his parents met while competition in ballroom dancing, and his grandparents were dancers also. It is no surprise that Derek’s parents supported his interest in pursuing dance as a career, and so they approved his move to London at the age of twelve, so that he might study professionally.

Derek remained in London until his early twenties, at which time he returned to the United States to begin work as a professional dancer. Hough rose to prominence after he joined the cast of Dancing with the Stars in 2007, and since then has become one of the show’s most popular and successful dancers, winning a record six seasons. Hough’s work on the show has also earned him two Primetime Emmy Awards for Outstanding Choreography, and another six nominations for the same.

Even before joining the cast of Dancing with the Stars, Derek Hough had performed on stage in various musicals, including Chitty Chitty Bang Bang and Jesus Christ Superstar. In 2006, Hough joined the cast of Footloose: The Musical in London’s West End, and in 2010, he made his Broadway debut in Burn the Floor. Hough has continued his theater work during his years with Dancing with the Stars, most recently with the New York Spring Spectacular at Radio City Music Hall.

Most recently, Derek Hough joined the cast of ABC’s drama, Nashville, in a recurring role. Hough is scheduled to join the cast of Hairspray Live! in late 2016, and in early 2017 he is scheduled to appear on Broadway in the lead role in Singin’ in the Rain.

For more information on booking Derek Hough, please contact Booking Entertainment. One of our top booking agents will be happy to work on your behalf to get you the best possible price to book any big name entertainer for your upcoming public, private or corporate event worldwide.

Booking Entertainment works to get the best possible Derek Hough booking fee and Derek Hough price for our clients while also providing the celebrity or famous entertainer with the level of professionalism and industry norms that they expect from an event run by a professional booking agency and production management.

Booking Entertainment uses our agency / management relationships and over 25 years of production experience to help buyers of headline / top name entertainers and does not claim or represent itself as the exclusive Derek Hough agent, manager or management company for any of the artists on our site.

Booking Entertainment does not claim or represent itself as the exclusive booking agency, business manager, publicist, speakers bureau or management for Derek Hough or any artists or celebrities on this website.