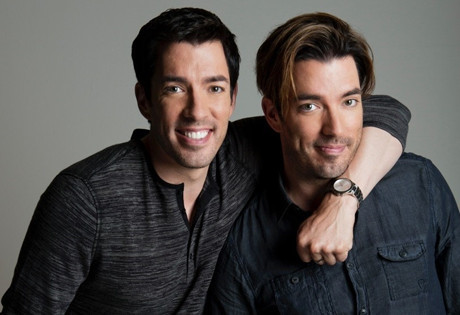 Start by filling out our no-obligation entertainment request form to check pricing and availability for Drew and Jonathan Scott or whoever else you may want.

Twin brothers Drew and Andrew Scott were born in 1978 in British Columbia, Canada. Today, the duo is best known as the stars of the hit HGTV series Property Brothers, but long before being discovered by the network, Drew and Andrew grew up in the Vancouver area, partnering even from the age of seven for their first small business venture. The two boys were also highly influenced by their father, a former actor and assistant director. The perfect blend of an entrepreneurial spirit and background in entertainment would ultimately be the formula for massive success for the Scotts in the future.

As children, both Jonathan and Drew were very active in performing arts, sketch comedy, and theater programs. Jonathan also developed an interest in and talent for magic. Both men had appeared on stage and in a number of small television roles before their HGTV series; Jonathan had also spent a number of years producing and promoting television shows, and he even served on the executive board for ACTRA for a few years.

Jonathan and Drew both began investing in real estate in their late teens. Both attended the University of Calgary, with Jonathan pursuing a degree in business management and Drew studying Kinesiology. In 2004, the two men founded Scott Real Estate, followed by Scott Brothers Entertainment, a film and digital production company. For the next fifteen years, the brothers renovated and flipped properties, until they shot their pilot pitch for HGTV.

Of course, HGTV saw the potential in the show and picked it up. Property Brothers aired for the first time in 2011, and has led to a number of spin-offs: Buying and Selling (2012 to present), Brother vs. Brother (2013 to present), and Property Brothers: At Home (which aired in 2014.) They also created the limited series Property Brothers: At Home on the Ranch, which features the brothers’ renovation of a Rocky Mountain estate for family friends in Alberta. The show featured some original music written by the brothers; the singles “Let the Night Shine In” and “Hold On” were released on iTunes and Google Play after the success of the show.

Most recently, Drew and Jonathan Scott launched Scott Living, their first furniture line, in 2015 via QVC. They also published the book Dream Home, which debuted in the top ten on the New York Times best sellers list upon its release in 2016.

For more information on booking Drew and Jonathan Scott, please contact Booking Entertainment. One of our top booking agents will be happy to work on your behalf to get you the best possible price to book any big name entertainer for your upcoming public, private or corporate event worldwide.

Booking Entertainment uses our agency / management relationships and over 25 years of production experience to help buyers of headline / top name entertainers and does not claim or represent itself as the exclusive Drew and Jonathan Scott agent, manager or management company for any of the artists on our site.

Booking Entertainment does not claim or represent itself as the exclusive booking agency, business manager, publicist, speakers bureau or management for Drew and Jonathan Scott or any artists or celebrities on this website.