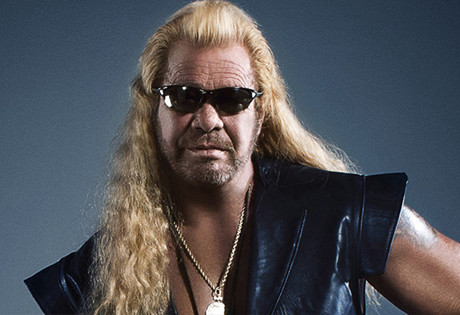 Start by filling out our no-obligation entertainment request form to check pricing and availability for Duane Dog Chapman or whoever else you may want.

Our Duane Dog Chapman agent will be happy to help you get Duane Dog Chapman's availability and booking fee, or the price and availability for any other A-List entertainer, band, comedian or celebrity you may want for your corporate event, private party, wedding, birthday party or public show.

As star of the A&E reality series Dog the Bounty Hunter, Duane “Dog” Chapman enthralled viewers for eight seasons. But long before his rise to television fame, Chapman’s life was filled with an even more dramatic and checkered past. In the mid 70’s, Duane spent five years in a Texas prison for first degree murder, ultimately serving eighteen months for an accidental shooting in which he took part.

After his release from jail, Chapman began a career as a bounty hunter. By the time he made international headlines for his capture of fugitive Andrew Luster in 2003, Duane had already captured hundreds of high-profile criminals. But Luster’s capture, in part due to his insidious crimes of rape and murder, brought headlines and a feature in the program Take This Job, which profiles people with unusual occupations. The episode featuring Chapman was a huge hit, leading to a spin-off focused exclusively on his work. A feature spot on an episode of Dominick Dunne’s Power, Privilege, and Justice followed, and in 2004, A&E offered Duane Chapman his own television show.

Dog the Bounty Hunter was one of A&E’s most successful programs for its eight season run, until the show was concluded in 2012. After the show wrapped, Chapman and his wife went on to star in Dog and Beth: On the Hunt, for the CMT network. The show featured Chapman, his wife, and also his son not only assisting in the capture and arrest of fugitives, but also providing advice to bail bond agencies. In addition to his work on television, Duane “Dog” Chapman has also authored the number one New York Times best seller, You Can Run But You Can’t Hide (2007), and the book Where Mercy Is Shown, Mercy Is Given (2010.)

For more information on booking Duane Dog Chapman, please contact Booking Entertainment. One of our top booking agents will be happy to work on your behalf to get you the best possible price to book any big name entertainer for your upcoming public, private or corporate event worldwide.

Booking Entertainment works to get the best possible Duane Dog Chapman booking fee and Duane Dog Chapman price for our clients while also providing the celebrity or famous entertainer with the level of professionalism and industry norms that they expect from an event run by a professional booking agency and production management.

Booking Entertainment uses our agency / management relationships and over 25 years of production experience to help buyers of headline / top name entertainers and does not claim or represent itself as the exclusive Duane Dog Chapman agent, manager or management company for any of the artists on our site.

Booking Entertainment does not claim or represent itself as the exclusive booking agency, business manager, publicist, speakers bureau or management for Duane Dog Chapman or any artists or celebrities on this website.