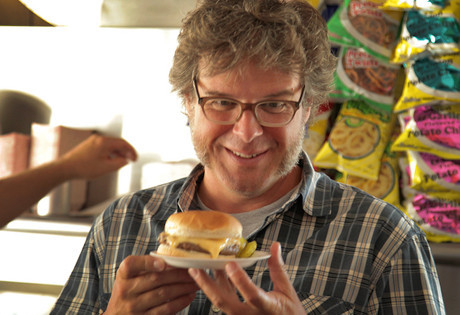 Start by filling out our no-obligation entertainment request form to check pricing and availability for George Motz or whoever else you may want.

Our George Motz agent will be happy to help you get George Motz's availability and booking fee, or the price and availability for any other A-List entertainer, band, comedian or celebrity you may want for your corporate event, private party, wedding, birthday party or public show.

George Motz, star of the reality television series Burger Land, rose to prominence in the culinary world with his documentary film Hamburger America, which premiered on the Sundance Channel in 2005. Motz had never aspired to become a “hamburger expert,” but rather a filmmaker; but after the success of his documentary, and the public’s association of his work with “hamburgers,” George resigned himself and became the face of America’s obsession with hamburgers.

Prior to the success of Hamburger America, George Motz had spent two decades working in television and film. After the film won him a James Beard Award, he immersed himself full-force into culinary, “hamburger” culture in the United States. By 2007, he’d created the Food Film Festival, which today screens annually in Charleston, Chicago, and New York City. In 2012, the Travel Channel pitched Motz on the idea of a television show around his hamburger expertise; Burger Land aired for the first time in 2012 and launched its first full season in 2013. The show features George Motz traveling the county in search of the best possible burgers in each state.

In addition to his success with Burger Land, Motz’s documentary Hamburger America is now also a best-selling book of the same name (published in 2008 and updated in 2011.) The documentary itself is often included as required viewing at a number of the nation’s culinary institutes.

For more information on booking George Motz, please contact Booking Entertainment. One of our top booking agents will be happy to work on your behalf to get you the best possible price to book any big name entertainer for your upcoming public, private or corporate event worldwide.

Booking Entertainment works to get the best possible George Motz booking fee and George Motz price for our clients while also providing the celebrity or famous entertainer with the level of professionalism and industry norms that they expect from an event run by a professional booking agency and production management.

Booking Entertainment uses our agency / management relationships and over 25 years of production experience to help buyers of headline / top name entertainers and does not claim or represent itself as the exclusive George Motz agent, manager or management company for any of the artists on our site.

Booking Entertainment does not claim or represent itself as the exclusive booking agency, business manager, publicist, speakers bureau or management for George Motz or any artists or celebrities on this website.