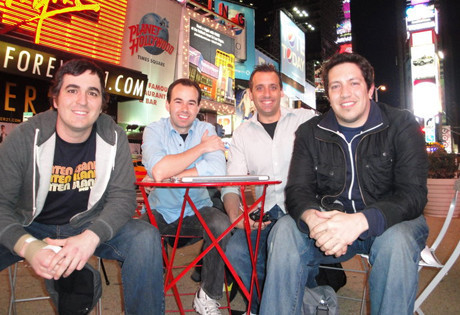 Start by filling out our no-obligation entertainment request form to check pricing and availability for Impractical Jokers or whoever else you may want.

The cast of the TruTV reality series, Impractical Jokers, never really expected to rise to fame on the popularity of the hidden-camera/practical-joke show. Sal Vulcano, Brian Quinn, James Murray, and Joe Gatto conceptualized the series with one key element that separated it from other similar formats; whichever cast member is chosen to complete the practical joke is not privy to the details of the prank until its actually in effect. Instead, they are coached along the way as they trap unsuspecting strangers into hilarious and embarrassing practical jokes.

Gatto, Murray, Quinn and Vulcano had met while still in high school on Staten Island in New York. After forming their first improve group, The Tenderloins, in 1999, the group began performing and competing, winning the reality competition “It’s Your Show” and eventually launching their own television series. Impractical Jokers was met with critical acclaim and commercial success, even earning comparisons to earlier “prank” shows such as the classic Candid Camera and then the more recent series, Jackass. Even the New York Times praised Impractical Jokers noted that the unique format, in which both the subject of the practical joke and the cast member discover the “joke” simultaneously.

Ultimately, Impractical Jokers earned more than a million and a half viewers for its premiere, setting the stage for a series that is still alive and well six years later, and which has spawned the spin-off series Impractical Jokers: Inside Jokes and Impractical Jokers: After Party. TruTV has announced that the show will renew through 2018 and syndicated later that same year.

For more information on booking Impractical Jokers, please contact Booking Entertainment. One of our top booking agents will be happy to work on your behalf to get you the best possible price to book any big name entertainer for your upcoming public, private or corporate event worldwide.

Booking Entertainment works to get the best possible Impractical Jokers booking fee and Impractical Jokers price for our clients while also providing the celebrity or famous entertainer with the level of professionalism and industry norms that they expect from an event run by a professional booking agency and production management.

Booking Entertainment uses our agency / management relationships and over 25 years of production experience to help buyers of headline / top name entertainers and does not claim or represent itself as the exclusive Impractical Jokers agent, manager or management company for any of the artists on our site.

Booking Entertainment does not claim or represent itself as the exclusive booking agency, business manager, publicist, speakers bureau or management for Impractical Jokers or any artists or celebrities on this website.