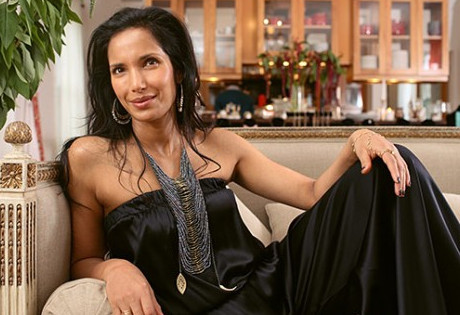 Start by filling out our no-obligation entertainment request form to check pricing and availability for Padma Lakshmi or whoever else you may want.

Our Padma Lakshmi agent will be happy to help you get Padma Lakshmi's availability and booking fee, or the price and availability for any other A-List entertainer, band, comedian or celebrity you may want for your corporate event, private party, wedding, birthday party or public show.

Celebrity chef, author, and television personality Padma Lakshmi was born in India in 1970. Lakshmi spent her early years growing up in the Chennai area of the country, until as a teenager she moved with her mother to California following her parents divorce.

Padma describes her teenage years as frustrating and challenging; she suffered at the hands of bullies during her high school years in Los Angeles and spent time split between her grandparents home in Chennai and her mother in the United States. After graduating from high school, Lakshmi earned her B.A. in Theater Arts from Clark University in Massachusetts. A study abroad program in Madrid brought her beauty to the attention of modeling agents in Europe, and so she began modeling for such high-profile designers as Ralph Lauren, Gianni Versace, and Giorgio Armani in her early twenties.

In 1999, Parma Lakshmi published her first cookbook, Easy Exotic, and it immediately became an award-winning culinary publication. The Food Network offered her a series of her own, Padma’s passport, in the early 2000’s, where she shared various recipes from around the globe. Additional Food Network specials followed, until in 2006 she joined the judging panel of the network’s hit reality show competition, Top Chef. The show has earned Lakshmi, one of the producers on the show, multiple Primetime Emmy Award nominations and a win for Outstanding Reality-Competition Program in 2010.

Parma Lakshmi has authored a second cookbook (Tangy, Tar, Hot and Sweet – 2007) and a memoir - Love, Loss, and What We Ate (2016.) In addition to her continued role on Top Chef, Lakshmi also occasionally writes for such publications as The New York Times and Harper’s Bazaar.

For more information on booking Padma Lakshmi, please contact Booking Entertainment. One of our top booking agents will be happy to work on your behalf to get you the best possible price to book any big name entertainer for your upcoming public, private or corporate event worldwide.

Booking Entertainment works to get the best possible Padma Lakshmi booking fee and Padma Lakshmi price for our clients while also providing the celebrity or famous entertainer with the level of professionalism and industry norms that they expect from an event run by a professional booking agency and production management.

Booking Entertainment uses our agency / management relationships and over 25 years of production experience to help buyers of headline / top name entertainers and does not claim or represent itself as the exclusive Padma Lakshmi agent, manager or management company for any of the artists on our site.

Booking Entertainment does not claim or represent itself as the exclusive booking agency, business manager, publicist, speakers bureau or management for Padma Lakshmi or any artists or celebrities on this website.