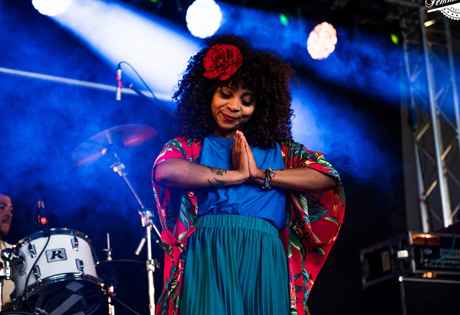 Start by filling out our no-obligation entertainment request form to check pricing and availability for Hollie Cook or whoever else you may want.

Our Hollie Cook agent will be happy to help you get Hollie Cook's availability and booking fee, or the price and availability for any other A-List entertainer, band, comedian or celebrity you may want for your corporate event, private party, wedding, birthday party or public show.

Hollie Cook is a British singer and keyboardist born in 1987. She was born and raised in West London, England, and came from a musically inclined family with a mother who sang and a father who was the lead drummer for the Sex Pistols. Cook would eventually learn the piano while simultaneously beginning to write lyrics and melodies.

Hollie Cook would eventually join the band Slits and contribute to their 2006 EP. She collaborated and recorded vocals on many musician’s projects before releasing her debut album in 2011. Hollie would receive critical praise and amass millions of streams on the project. Her next two albums performed well on the charts and garnered many listeners.

Hollie Cook’s debut album would be featured in major publications including the BBC, among others. Her following two projects would chart on the Billboard Top Reggae Albums chart, with her 2018 album Vessel of Love taking the #1 spot in the debut week. Cook has performed in a myriad of venues, including BBC broadcast sets and reunion shows for bands, as she is also well known for her cover work.

Hollie Cook recently released “Dance in the Sunshine,” which received critical praise in a number of publications and performed well with listeners.

For more information on booking Hollie Cook, please contact Booking Entertainment. One of our top booking agents will be happy to work on your behalf to get you the best possible price to book any big name entertainer for your upcoming public, private or corporate event worldwide.

Booking Entertainment works to get the best possible Hollie Cook booking fee and Hollie Cook price for our clients while also providing the celebrity or famous entertainer with the level of professionalism and industry norms that they expect from an event run by a professional booking agency and production management.

Booking Entertainment uses our agency / management relationships and over 25 years of production experience to help buyers of headline / top name entertainers and does not claim or represent itself as the exclusive Hollie Cook agent, manager or management company for any of the artists on our site.

Booking Entertainment does not claim or represent itself as the exclusive booking agency, business manager, publicist, speakers bureau or management for Hollie Cook or any artists or celebrities on this website.