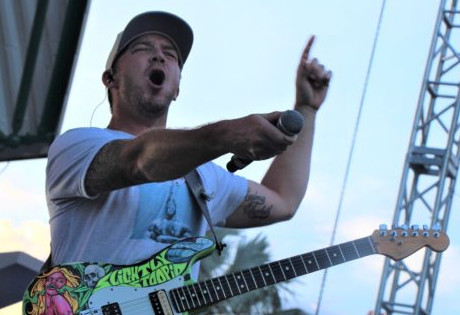 Start by filling out our no-obligation entertainment request form to check pricing and availability for Slightly Stoopid or whoever else you may want.

Our Slightly Stoopid agent will be happy to help you get Slightly Stoopid's availability and booking fee, or the price and availability for any other A-List entertainer, band, comedian or celebrity you may want for your corporate event, private party, wedding, birthday party or public show.

The American band Slightly Stoopid was established in California in 1994 by founding members Kyle McDonald and Miles Dougherty. The two musicians had grown up together as childhood friends, and after recruiting their high school classmate Adam Bausch on drums, they began to explore musical influences, write some original music, and start performing around the Ocean Beach area of San Diego.

With a unique fusion of reggae, folk, hip-hop, and even metal, Slightly Stoopid quickly caught the attention of industry professionals, despite their youth and inexperience. Ultimately, it was Bradley Nowell of Sublime fame who offered the group their first record deal on his own label, Skunk Records, even before the band members had graduated from high school. In 1996, Slightly Stoopid released their self-titled debut, bringing the group some moderate success.

Although it was the 2003 album Everything You Need that became the first Slightly Stoopid album to chart (up to the number twenty spot on the indie charts), it was the album Closer to the Sun that finally brought Slightly Stoopid to the mainstream charts in 2005. The album Chronchitis became the band’s first breakthrough, reaching into the top forty internationally and up to the number fifty-five spot in the United States upon its release in 2007. The albums Slightly Not Stoned Enough to Eat Breakfast yet Stoopid (2008) and Top of the World (2012) followed, with the latter rising into the top five internationally and into the top twenty in the United States. Charting singles from Slightly Stoopid include “2 A.M” (from Chronchitis) and “Top of the World” (title track from the album of the same name.

Clearly, Slightly Stoopid is a band still on the rise and one to watch in the coming years. The band has toured extensively since its inception, performing at nearly every major festival throughout the nation, including Austin City Limits, Coachella, and Lollapalooza. Slightly Stoopid has also enjoyed sold-out shows internationally, in countries such as Germany, Australia, Japan, and the Netherlands.

For more information on booking Slightly Stoopid, please contact Booking Entertainment. One of our top booking agents will be happy to work on your behalf to get you the best possible price to book any big name entertainer for your upcoming public, private or corporate event worldwide.

Booking Entertainment works to get the best possible Slightly Stoopid booking fee and Slightly Stoopid price for our clients while also providing the celebrity or famous entertainer with the level of professionalism and industry norms that they expect from an event run by a professional booking agency and production management.

Booking Entertainment uses our agency / management relationships and over 25 years of production experience to help buyers of headline / top name entertainers and does not claim or represent itself as the exclusive Slightly Stoopid agent, manager or management company for any of the artists on our site.

Booking Entertainment does not claim or represent itself as the exclusive booking agency, business manager, publicist, speakers bureau or management for Slightly Stoopid or any artists or celebrities on this website.