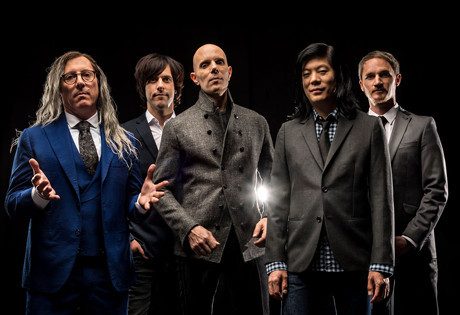 Start by filling out our no-obligation entertainment request form to check pricing and availability for A Perfect Circle or whoever else you may want.

Our A Perfect Circle agent will be happy to help you get A Perfect Circle's availability and booking fee, or the price and availability for any other A-List entertainer, band, comedian or celebrity you may want for your corporate event, private party, wedding, birthday party or public show.

The rock supergroup known as A Perfect Circle was established in the late 1990’s, bringing together Tool’s vocalist and front man (Maynard James Keenan) and guitarist Billy Howerdel. Over the years the band has experienced various changes to the lineup, bringing in other notable musicians from highly successful bands, but at the start Keenan and Howerdel were joined by musicians Troy Van Leeuwen (of Failure) and Tim Alexander (of Primus.) A Perfect Circle performed its first live performance in the summer of 1999 and was an instant smash hit.

Mer de Noms, A Perfect Circle’s debut album, arrived in the following year and rose to the top five on the Billboard albums charts. The album spawned the singles “Judith,” “3 Libras,” and “The Hollow.” Two more albums followed (Thirteenth Step in 2003 and eMOTIVe in 2004), giving audiences the singles “Weak and Powerless,” “The Outsider,” “Blue,” “Imagine,” “Passive,” and “By and Down.” A Perfect Circle embarked on a hiatus in 2005, after performing to a sell-out crowd in Denver, Colorado, and the band’s individual musicians returned to work on other projects in the meantime. Three years later, A Perfect Circle regrouped and began writing new material, although it would be a number of years before any of it was released.

A Perfect Circle returned to touring and live performances in 2010, appearing on such programs as Last Call with Carson Daly and Jimmy Kimmel Live!, and hitting the stage at such festivals as Lollapalooza, Edgefest, Boonstock Music Festival, and Rock on the Range. In the meantime, A Perfect Circle continued to write and prepare new music, and in the fall of 2013, the band released the compilation album Three Sixty and announced plans for another studio album to release within the next year.

A Perfect Circle continues to perform with the current lineup of Keenan, Howerdel, James Iha (of the Smashing Pumpkins), Matt McJunkins (of Puscifer), and Jeff Friedl. The band most recently released the box-set A Perfect Circle Live: Featuring Stone and Echo (2013.)

For more information on booking A Perfect Circle, please contact Booking Entertainment. One of our top booking agents will be happy to work on your behalf to get you the best possible price to book any big name entertainer for your upcoming public, private or corporate event worldwide.

Booking Entertainment works to get the best possible A Perfect Circle booking fee and A Perfect Circle price for our clients while also providing the celebrity or famous entertainer with the level of professionalism and industry norms that they expect from an event run by a professional booking agency and production management.

Booking Entertainment uses our agency / management relationships and over 25 years of production experience to help buyers of headline / top name entertainers and does not claim or represent itself as the exclusive A Perfect Circle agent, manager or management company for any of the artists on our site.

Booking Entertainment does not claim or represent itself as the exclusive booking agency, business manager, publicist, speakers bureau or management for A Perfect Circle or any artists or celebrities on this website.