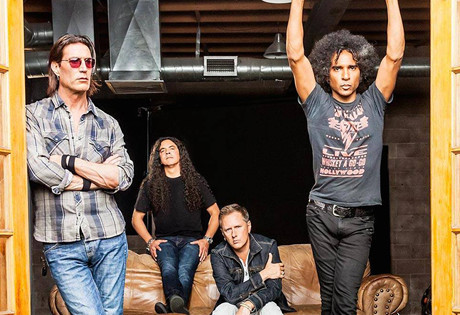 Start by filling out our no-obligation entertainment request form to check pricing and availability for Alice In Chains or whoever else you may want.

Our Alice In Chains agent will be happy to help you get Alice In Chains's availability and booking fee, or the price and availability for any other A-List entertainer, band, comedian or celebrity you may want for your corporate event, private party, wedding, birthday party or public show.

The American rock band known as Alice in Chains was established in Seattle, Washington, by founding members Layne Staley and Jerry Cantrell. Long before Alice in Chains rose to fame as one of the most significant rock groups of the grunge era, Layne Staley had been working as a vocalist for a band known as Alice N’ Chains, when a chance meeting with Jerry Cantrell forged a friendship between the two musicians. After the original Alice N’ Chains disbanded, Jerry and Layne decided to form a new group, modifying the name to Alice in Chains.

After the addition of Mike Starr and Sean Kinney, Alice in Chains entered the studio and began recording demos. The group’s first demo, The Treehouse Tapes, found its way to the managers of the currently successful group, Soundgarden. The managers negotiated a deal with Columbia Records, and Alice in Chains found itself with its first record deal in 1989. Before releasing a major label debut album, Alice in Chains released the EP We Die Young, and the title track became an instant hit. The band entered the studio to record a full-length debut, Facelift, which was released in 1990.

Facelift was a moderate and slow-simmering success at first, until the release of the album’s single “Man in the Box.” With heavy airplay on both radio and MTV, the single rose into the top twenty and brought the album with it, ultimately making Facelift one of the most critically acclaimed albums of the grunge period and bringing Alice in Chains a Grammy nomination for Best Hard Rock Performance for “Man in the Box.”

Alice in Chains followed Facelift with Dirt (1992) and Alice in Chains (1995), giving audiences the additional hit singles: “Sea of Sorrow,” “Them Bones,” “Rooster,” “Down a Hole,” “No Excuses,” “I Stay Away,” “Don’t Follow,” “Heaven Beside You,” “Over Now,” and “Get Born Again,” to name a few. During this period, Alice in Chains garnered nine Grammy nominations, and it certainly appeared as though they were on a steady rocket ride to the top, experiencing the best of good fortune.

That luck ran out with the untimely death of Staley in 2002. Although Alice in Chains had already embarked on a lengthy hiatus during which time individual members pursued other projects, the passing of Staley left the future of the band in question. But in 2005, the remaining member of Alice in Chains reunited for a benefit concert, and the band decided to forge forward with William DuVall replacing Staley. The band released the album Black Gives Way to Blue in 2009, followed by The Devil Put Dinosaurs Here in 2013.

Today, Alice in Chains continues to perform and record with the current lineup of DuVall, Jerry Cantrell, Mike Inez, and Sean Kinney. The band recently toured the United States in 2013 and Europe in 2014, and is expected to add more live performance dates in the near future.

For more information on booking Alice In Chains, please contact Booking Entertainment. One of our top booking agents will be happy to work on your behalf to get you the best possible price to book any big name entertainer for your upcoming public, private or corporate event worldwide.

Booking Entertainment works to get the best possible Alice In Chains booking fee and Alice In Chains price for our clients while also providing the celebrity or famous entertainer with the level of professionalism and industry norms that they expect from an event run by a professional booking agency and production management.

Booking Entertainment uses our agency / management relationships and over 25 years of production experience to help buyers of headline / top name entertainers and does not claim or represent itself as the exclusive Alice In Chains agent, manager or management company for any of the artists on our site.

Booking Entertainment does not claim or represent itself as the exclusive booking agency, business manager, publicist, speakers bureau or management for Alice In Chains or any artists or celebrities on this website.