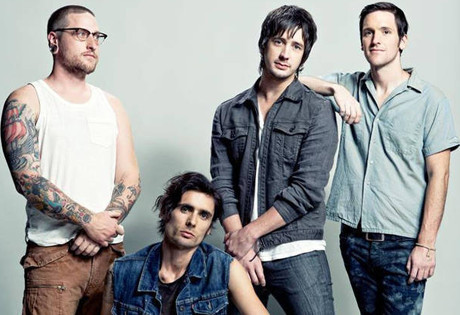 Start by filling out our no-obligation entertainment request form to check pricing and availability for All American Rejects or whoever else you may want.

The All-American Rejects was founded by Tyson Ritter and Nick Wheeler in 1999 while the two were still high school students. The duo added Mike Kennerty, and Chris Gaylor shortly thereafter, and released their self-titled, twelve-song demo. A follow-up demo (Same Girl, New Songs) garnered the attention of record labels, and by 2001, the All-American Rejects had signed their first major label deal and released a self-titled major label debut album in the following year.

The All-American Rejects featured the single “Swing, Swing,” which reached into the hot 100 on the charts and rose to the number eight spot on the rock charts. The album’s follow-up single, “The Last Song,” was also successful, climbing into the top 40 on the rock charts. By 2003, the All-American Rejects had launched their first headlining tour and released a DVD of their live performances - Live from Oklahoma… The Too Bad for Hell DVD! Three albums followed: Move Along (2005), When the World Comes Down (2008), and Kids in the Street (2012.) The albums spawned the singles: “Time Stands Still,” “Dirty Little Secret,” “Move Along,” “It Ends Tonight,” “Gives You Hell,” “The Wind Blows,” “I Wanna,” “Beekeeper’s Daughter,” “Kids in the Street,” and “Heartbeat Slowing Down.”

During this time, All American Rejects embraced a number of opportunities to include their music in film and on television. Tyson Ritter appeared in the film The House Bunny and included the song “I Wanna” in the film in 2008. “Real World” was included in the soundtrack for the 2009 film Transformers: Revenge of the Fallen, and “The Poison” was included in the Almost Alice compilation, inspired by the film Alice in Wonderland (2010.) The television show 90210 also featured the song “Beekeeper’s Daughter” on one of its episodes in 2012. All American Rejects also helped to make music history, being one of the bands to perform at the MTV World Stage Live in Malaysia, the first event of its kind in Asia.

All American Rejects continues to perform and record with the current lineup of Tyson Ritter, Nick Wheeler, Mike Kennerty, and Chris Gaylor. The band recently spent most of 2016 and 2017 in the studio preparing for their next EP. The album, as yet untitled, is scheduled for release in early 2018.

For more information on booking All American Rejects, please contact Booking Entertainment. One of our top booking agents will be happy to work on your behalf to get you the best possible price to book any big name entertainer for your upcoming public, private or corporate event worldwide.

Booking Entertainment uses our agency / management relationships and over 25 years of production experience to help buyers of headline / top name entertainers and does not claim or represent itself as the exclusive All American Rejects agent, manager or management company for any of the artists on our site.

Booking Entertainment does not claim or represent itself as the exclusive booking agency, business manager, publicist, speakers bureau or management for All American Rejects or any artists or celebrities on this website.