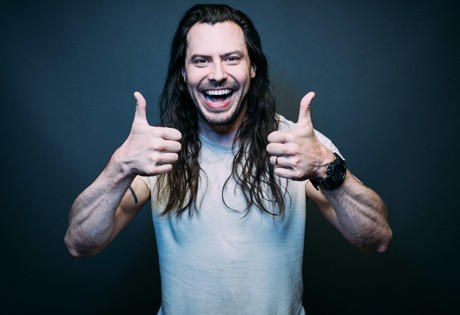 Start by filling out our no-obligation entertainment request form to check pricing and availability for Andrew WK or whoever else you may want.

Our Andrew WK agent will be happy to help you get Andrew WK's availability and booking fee, or the price and availability for any other A-List entertainer, band, comedian or celebrity you may want for your corporate event, private party, wedding, birthday party or public show.

The American singer, music producer, and television host Andrew W.K. was born Andrew Fetterly Wilkes-Krier in 1979 in Palo Alto, California. Andrew grew up in Ann Arbor, Michigan, and began studying classical piano when he was still in preschool. Piano was his focus throughout much of his musical upbringing, and he explored everything from classical to jazz while attending a variety of music schools.

Andrew’s first foray into pop music was when he joined the band Slam at the age of fourteen. Slam was the start of a series of bands in which Andrew W.K. would find himself, until in the late 1990’s when a move to New York City changed his focus. After arriving in New York City, Andrew W.K. set his sights on a career as a solo artist. He recorded a series of demos, and then released the EP AWKGOJ in 2000. The demo garnered the interest of Island Def Jam Records, and he signed with the label later that year.

With Island Def Jam, Andrew W.K. released the album I Get Wet, which rose into the number on position on the Heatseekers list. The album featured the song “Party Hard,” which founds its way into a number of video games and other DVDs. The album’s second single, “It’s Time To Party,” also appeared in commercials for Coors Beer, NASCAR, and the third single, “ Fun Night,” was used in the movie Old School. Finally, “She Is Beautiful” appeared in the movies American Pie: Band Camp and Freaky Friday.

To follow the success of his first album, Andrew W.K. released The Wolf, which spawned the singles “The Wolf,” “Long Live the Party,” and “Tear It Up.” But the album was not quite as successful as I Get Wet, and so Andrew began to perform as a motivational speaker, targeting university students around the country. His lectures became quite popular, and he has since become known as one of the most philosophical and sought-after speakers for high school and college students. He has also appeared on a number of television talk shows, frequenting the late-night circuit with regularity.

Even while he continues to appear as a motivational speaker, Andrew W.K. has also continued to perform and record as a musician. Since launching his career as a speaker, Andrew has released the albums: Close Calls With Brick Walls (2006), The Japan Covers (2008), 55 Cadillac (2009), and Gundam Rock (2009.) He also launched his own record label and continues to serve as a producer for other musicians.

For more information on booking Andrew WK, please contact Booking Entertainment. One of our top booking agents will be happy to work on your behalf to get you the best possible price to book any big name entertainer for your upcoming public, private or corporate event worldwide.

Booking Entertainment works to get the best possible Andrew WK booking fee and Andrew WK price for our clients while also providing the celebrity or famous entertainer with the level of professionalism and industry norms that they expect from an event run by a professional booking agency and production management.

Booking Entertainment uses our agency / management relationships and over 25 years of production experience to help buyers of headline / top name entertainers and does not claim or represent itself as the exclusive Andrew WK agent, manager or management company for any of the artists on our site.

Booking Entertainment does not claim or represent itself as the exclusive booking agency, business manager, publicist, speakers bureau or management for Andrew WK or any artists or celebrities on this website.