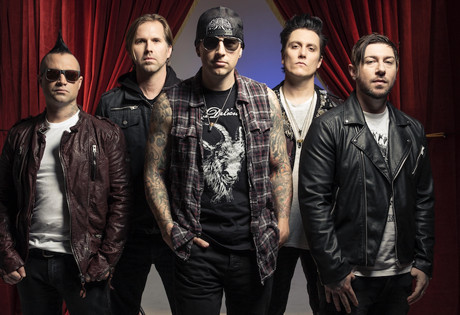 Start by filling out our no-obligation entertainment request form to check pricing and availability for Avenged Sevenfold or whoever else you may want.

Avenged Sevenfold was created in 1999 in California, by founding members Zacky Vengeance, M. Shadows, Matt Wendt, and The Rev. Sounding the Seventh Trumpet, Avenged Sevenfold’s debut album, was released in 2001, but re-released after the band signed to Hopeless Records a year later. The band experienced some changes to the lineup, and released their sophomore effort, Waking the Fallen, in 2003.

Waking the Fallen began to garner Avenged Sevenfold more attention and positive critical reviews, and an offer from Warner Bros. Records. After switching labels, Avenged Sevenfold embarked on a more “metalcore” sound, releasing the album City of Evil, which rose to the number thirty spot on the charts. The albums Avenged Sevenfold (2007) and Nightmare (2010) followed, bringing audiences the singles “Nightmare,” “Welcome to the Family,” “So Far Away,” “Not Ready to Die,” “Buried Alive,” and “Carry On.”

Despite the untimely death of band member The Rev Sullivan, Avenged Sevenfold has continued forward with a new drummer, headlining the Uproar Festival in 2011, performing at the Orion Music + More Festival, and touring throughout Asia in 2012. Avenged Sevenfold has so far sold more than eight million copies of its five studio albums. Most recently, the band released the album Hail to the King, in 2013.

For more information on booking Avenged Sevenfold , please contact Booking Entertainment. One of our top booking agents will be happy to work on your behalf to get you the best possible price to book any big name entertainer for your upcoming public, private or corporate event worldwide.

Booking Entertainment works to get the best possible Avenged Sevenfold booking fee and Avenged Sevenfold price for our clients while also providing the celebrity or famous entertainer with the level of professionalism and industry norms that they expect from an event run by a professional booking agency and production management.

Booking Entertainment uses our agency / management relationships and over 25 years of production experience to help buyers of headline / top name entertainers and does not claim or represent itself as the exclusive Avenged Sevenfold agent, manager or management company for any of the artists on our site.

Booking Entertainment does not claim or represent itself as the exclusive booking agency, business manager, publicist, speakers bureau or management for Avenged Sevenfold or any artists or celebrities on this website.