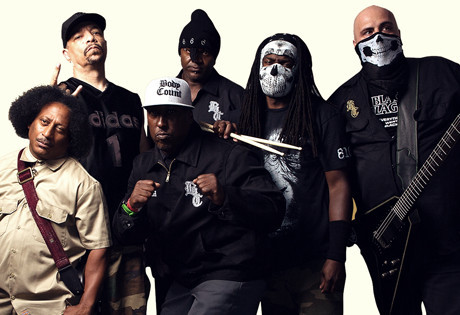 Start by filling out our no-obligation entertainment request form to check pricing and availability for Body Count or whoever else you may want.

Our Body Count agent will be happy to help you get Body Count's availability and booking fee, or the price and availability for any other A-List entertainer, band, comedian or celebrity you may want for your corporate event, private party, wedding, birthday party or public show.

The American metal band known as Body Count was founded in 1990 by already established musician Ice-T. Although Ice-T had long been best known as a highly respected rap and hip-hop artist, his love of heavy metal encouraged him to team up with Ernie C., Mooseman, D-Roc, and Beatmaster V, all of whom had been longtime friends of Ice-T and who shared his love of heavy metal.

Ice-T introduced Body Count at Lollapalooza in 1992, where he was already scheduled to perform a rap and hip-hop set. The performance was a hit, and Ice-T decided to include Body Count on his 1991 album O.G. Original Gangster. The group’s self-titled debut followed the next year, and was immediately well-received. Body Count began to tour internationally, and the controversial debut single, “Cop Killer,” began to garner significant attention, although perhaps not in the manner Ice-T would have preferred.

“Cop Killer” spawned multiple protests from police organizations throughout the country, and ultimately Ice-T decided to remove it from Cop Killer and instead replace it with the song “Freedom of Speech.” Despite Body Count’s controversial start, the album itself received praise from The Village Voice, Entertainment Weekly, and a number of other industry reviewers. Ultimately, “Cop Killer” likely bolstered the early success of Body County, and paved the way for the follow-up albums: Born Dead (1994), Violent Demise: The Last Days (1997), and Murder 4 Hire (2006.)

In recent years, there have been multiple changes to the lineup for Body Count, due to the departure of some members and the untimely passing of others (Mooseman was lost to a drive-by shooting and D-Roc succumbed to lymphoma.) Currently, Body County continues to perform and record with the current lineup of Ice-T, Ernie C., Sean E Sean, Vincent Price, III Will, and Juan of the Dead. Body Count most recently released the album Manslaughter in 2014.

For more information on booking Body Count, please contact Booking Entertainment. One of our top booking agents will be happy to work on your behalf to get you the best possible price to book any big name entertainer for your upcoming public, private or corporate event worldwide.

Booking Entertainment works to get the best possible Body Count booking fee and Body Count price for our clients while also providing the celebrity or famous entertainer with the level of professionalism and industry norms that they expect from an event run by a professional booking agency and production management.

Booking Entertainment uses our agency / management relationships and over 25 years of production experience to help buyers of headline / top name entertainers and does not claim or represent itself as the exclusive Body Count agent, manager or management company for any of the artists on our site.

Booking Entertainment does not claim or represent itself as the exclusive booking agency, business manager, publicist, speakers bureau or management for Body Count or any artists or celebrities on this website.