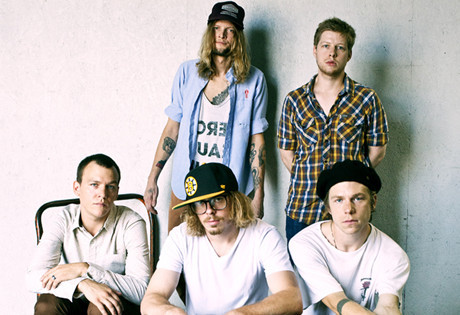 Start by filling out our no-obligation entertainment request form to check pricing and availability for Cage the Elephant or whoever else you may want.

Our Cage the Elephant agent will be happy to help you get Cage the Elephant's availability and booking fee, or the price and availability for any other A-List entertainer, band, comedian or celebrity you may want for your corporate event, private party, wedding, birthday party or public show.

Cage the Elephant was established in 2006 in Bowling Green, Kentucky, by founding members Matt Shultz, Brad Schultz, Lincoln Parish, Daniel Tichenor, and Jared Champion. After signing to Relentless Records, Cage the Elephant released their self-titled debut in 2008 to critical acclaim and commercial success. Following a performance at the South by South Music Festival, Cage the Elephant appeared on the Late Show with David Letterman, and then at the Lollapalooza festival, gaining fans along the way.

Although Cage the Elephant is just getting started, the band has followed up a highly successful debut with Thank You, Happy Birthday in 2011, and so far has placed a number of singles at the top of the Alternative charts, including: “In One Ear,” “Ain’t No Rest for the Wicked,” “Back Against the Wall,” “Shake Me Down,” “Around My Head,” “Aberdeen,” and “Always Something.” Cage the Elephant followed that success with the albums Melophobia (2013), Tell Me I'm Pretty (2015), and the live album Live from the Vic in Chicago (2012.) Melophobia earned the group their first Grammy Award nomination for Best Alternative Music Album, and Tell Me I'm Pretty won a Grammy for Best Rock Album.

Cage the Elephant continues to perform and record with the current lineup of Champion, Matt & Brad Schultz, Tischenor, Nick Bockrath, and Matthan Minster. The group released their latest album, a live album titled Unpeeled, in 2017. They are currently putting the finishing touches on their next studio album, expected to release in 2018.

For more information on booking Cage the Elephant, please contact Booking Entertainment. One of our top booking agents will be happy to work on your behalf to get you the best possible price to book any big name entertainer for your upcoming public, private or corporate event worldwide.

Booking Entertainment works to get the best possible Cage the Elephant booking fee and Cage the Elephant price for our clients while also providing the celebrity or famous entertainer with the level of professionalism and industry norms that they expect from an event run by a professional booking agency and production management.

Booking Entertainment uses our agency / management relationships and over 25 years of production experience to help buyers of headline / top name entertainers and does not claim or represent itself as the exclusive Cage the Elephant agent, manager or management company for any of the artists on our site.

Booking Entertainment does not claim or represent itself as the exclusive booking agency, business manager, publicist, speakers bureau or management for Cage the Elephant or any artists or celebrities on this website.