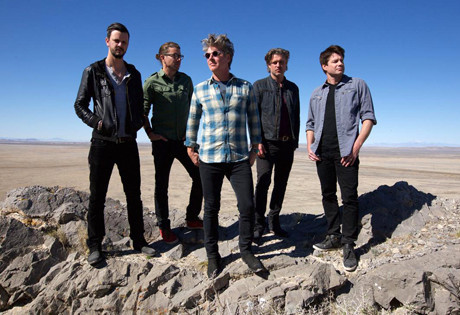 Start by filling out our no-obligation entertainment request form to check pricing and availability for Collective Soul or whoever else you may want.

Our Collective Soul agent will be happy to help you get Collective Soul's availability and booking fee, or the price and availability for any other A-List entertainer, band, comedian or celebrity you may want for your corporate event, private party, wedding, birthday party or public show.

The rock band known as Collective Soul was founded in Georgia in the early 1990’s, when the original members came together while Ed Roland was studying music at the Berklee College of Music in Boston. After releasing his own demo album as a solo artist in the early 1990’s, Ed began recruiting to form his own group, teaming up with local area musicians and performing live around town under the name Marching Two-Step. The band experienced some success in Atlanta, but didn’t experience the breakthrough Ed had hoped for, and so he turned to studio musicians to help him record another demo.

The demo found its was to a local radio station in Orlando, Florida, and the song “Shine” began to take off as an underground hit. A demand for live performances rose, and so Ed teamed up with some other musicians, who would eventually become part of the Collective Soul lineup, and the group garnered the attention of Atlantic Records. With Atlantic, Collective soul released the demo Hints Allegations and Things Left Unsaid (1993), which rose to double-platinum status. Their official debut, the self-titled Collective Soul (1992), reached triple-platinum status and spawned the chart-topping hits “Smashing Young Man,” “Gel,” “The World I Know,” “Where the River Flows,” and “December.”

Since then, Collective Soul has released the albums Disciplined Breakdown (1997), Dosage (1999), Blender (2000), Youth (2004), From the Ground Up (2005), Afterwards (2007), and Collective Soul (2009.) The albums have given audiences the additional hits “Better Now,” “Heavy,” “Hollywood,” and “Precious Declaration.” Collective Soul continues to perform and record together, with the current lineup of Ed and Dean Roland, Joel Kosche, and Will Turpin, although the individual members have embarked on other projects in recent years. Turpin and Kosche have released solo albums, and Ed Roland has formed the band Ed Roland and the Sweet Tea Project, releasing the album Devils ‘n Darlins in 2013.

Today, Collective Soul continues to perform and record with the current lineup of Ed Roland, Dean Roland, Will Turpin, Johnny Rabb, and Jesse Triplett. The band’s most recently album, See What You Started by Continuing, was released in 2015. Collective Soul is currently in the studio preparing for their tenth studio album, slated for release in early 2019.

For more information on booking Collective Soul, please contact Booking Entertainment. One of our top booking agents will be happy to work on your behalf to get you the best possible price to book any big name entertainer for your upcoming public, private or corporate event worldwide.

Booking Entertainment works to get the best possible Collective Soul booking fee and Collective Soul price for our clients while also providing the celebrity or famous entertainer with the level of professionalism and industry norms that they expect from an event run by a professional booking agency and production management.

Booking Entertainment uses our agency / management relationships and over 25 years of production experience to help buyers of headline / top name entertainers and does not claim or represent itself as the exclusive Collective Soul agent, manager or management company for any of the artists on our site.

Booking Entertainment does not claim or represent itself as the exclusive booking agency, business manager, publicist, speakers bureau or management for Collective Soul or any artists or celebrities on this website.