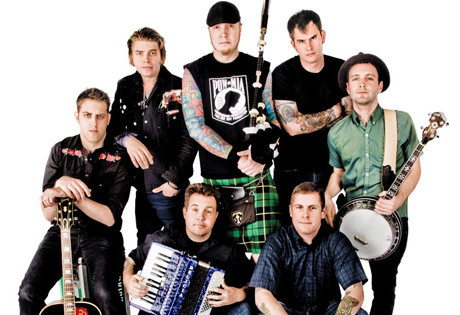 Start by filling out our no-obligation entertainment request form to check pricing and availability for Dropkick Murphys or whoever else you may want.

Our Dropkick Murphys agent will be happy to help you get Dropkick Murphys's availability and booking fee, or the price and availability for any other A-List entertainer, band, comedian or celebrity you may want for your corporate event, private party, wedding, birthday party or public show.

Dropkick Murphys were established in Massachusetts in the mid 1990’s, by founding members Rick Barton, Mike CcColgan, Jeff Erna, and Ken Casey. The four musicians came together and began performing locally at first, and then in 1997, the Dropkick Murphys were invited by The Mighty Mighty Bosstones to join them on tour. The exposure helped to develop a fan base for the Dropkick Murphys, and eventually their unique punk rock sound caught the attention of Hellcat Records, which signed them in 1998.

Do or Die, the Dropkick Murphys debut album, was released later that same year, followed by The Gang’s All Here in 1999, and since that time the Dropkick Murphys have released a series of successful albums: Sing Loud, Sing Proud! (2001), Blackout (2003), The Warrior’s Code (2005), The Meanest of Times (2007), and Going out of Style (2011.) The albums spawned the singles “I’m Shipping up to Boston,” “The State of Massachusetts,” “The Season’s Upon Us,” and “Rose Tattoo,” the latter of which features vocal contributions from Bruce Springsteen.

Aside from a switch to Warner Bros. Records and some changes to the lineup, the Dropkick Murphys have continued to perform and record continuously for the last two decades. Their hit single “I’m Shipping Up to Boston” has been used as the warm up song for the Boston Celtics, and its acoustic version can be heard as the theme song to Rizzoli & Isles (currently on TNT.) The song “Out of Our Heads” is also currently being used for the network’s documentary style reality show, Boston’s Finest.

The Dropkick Murphys have been not only avid supporters of all endeavors to benefit the Boston area, but they have also becoming synonymous with the struggles of the working class, frequently serving as a voice for the AFL-CIO across the nation. The song “Take ‘Em Down” has been used (with the support of the band) as an anthem for the Wisconsin union struggles.  Following the Boston Marathon bombings, the Dropkick Murphys also crafted Rose Tattoo: For Boston Charity, an EP to raise funds for the families and communities affected by the tragedy.

Most recently, the Dropkick Murphy’s released the album Signed and Sealed in Blood (2013.) The band continues to record, perform, and tour.

For more information on booking Dropkick Murphys, please contact Booking Entertainment. One of our top booking agents will be happy to work on your behalf to get you the best possible price to book any big name entertainer for your upcoming public, private or corporate event worldwide.

Booking Entertainment works to get the best possible Dropkick Murphys booking fee and Dropkick Murphys price for our clients while also providing the celebrity or famous entertainer with the level of professionalism and industry norms that they expect from an event run by a professional booking agency and production management.

Booking Entertainment uses our agency / management relationships and over 25 years of production experience to help buyers of headline / top name entertainers and does not claim or represent itself as the exclusive Dropkick Murphys agent, manager or management company for any of the artists on our site.

Booking Entertainment does not claim or represent itself as the exclusive booking agency, business manager, publicist, speakers bureau or management for Dropkick Murphys or any artists or celebrities on this website.