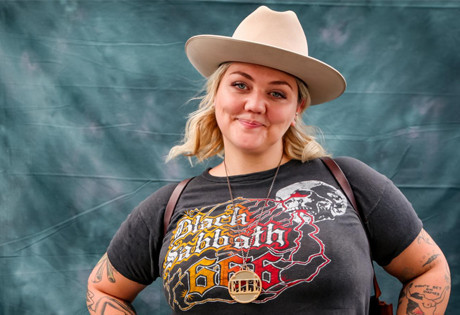 Start by filling out our no-obligation entertainment request form to check pricing and availability for Elle King or whoever else you may want.

Our Elle King agent will be happy to help you get Elle King's availability and booking fee, or the price and availability for any other A-List entertainer, band, comedian or celebrity you may want for your corporate event, private party, wedding, birthday party or public show.

The American actress and singer Elle King was born in 1989 in Los Angeles, California. As the daughter of Saturday Night Live alumnus Rob Schneider, Elle was no stranger to the entertainment industry, and she even made her big screen debut alongside her father in Deuce Bigalow: Male Gigolo at the age of ten. But King’s first love was always music, and as a young teenager she began to study guitar and banjo.

After graduating from high school she entered college to study film, but she also began to compose music, frequently using the banjo as her primary instrument of composition. By the time she was sixteen, she was performing around New York City, eventually garnering the attention of RCA Records. After signing with the label, Elle King released her debut single, “Good To Be A Man,” in the spring of 2012. The song preceded the release of the EP, the Elle King EP, which featured four songs, one of which, “Playing for Keeps,” went on to become the theme song for the VH1 series Mob Wives Chicago.

Throughout 2013, Elle King performed at a number of high profile events, including Austin’s South by Southwest Festival, and she toured in support of other performers such as Ed Sheeran. But her biggest breakthrough came with the release of her single “Ex’s & Oh’s” in the fall of 2014, which preceded the release of her debut album, Love Stuff. The single was a massive hit, rising into the top ten on the charts and earning King Grammy nominations for Best Rock Song and Best Rock Performance.

Elle King is a star on the rise and definitely one to watch. She is expected to release a follow-up album to Love Stuff within the coming year.

For more information on booking Elle King, please contact Booking Entertainment. One of our top booking agents will be happy to work on your behalf to get you the best possible price to book any big name entertainer for your upcoming public, private or corporate event worldwide.

Booking Entertainment works to get the best possible Elle King booking fee and Elle King price for our clients while also providing the celebrity or famous entertainer with the level of professionalism and industry norms that they expect from an event run by a professional booking agency and production management.

Booking Entertainment uses our agency / management relationships and over 25 years of production experience to help buyers of headline / top name entertainers and does not claim or represent itself as the exclusive Elle King agent, manager or management company for any of the artists on our site.

Booking Entertainment does not claim or represent itself as the exclusive booking agency, business manager, publicist, speakers bureau or management for Elle King or any artists or celebrities on this website.