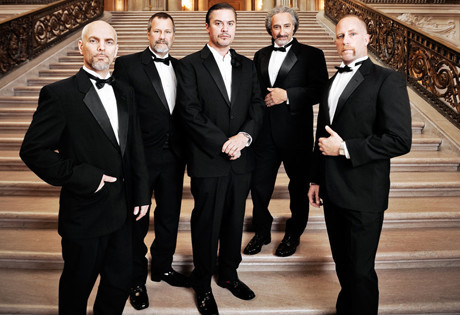 Start by filling out our no-obligation entertainment request form to check pricing and availability for Faith No More or whoever else you may want.

Our Faith No More agent will be happy to help you get Faith No More's availability and booking fee, or the price and availability for any other A-List entertainer, band, comedian or celebrity you may want for your corporate event, private party, wedding, birthday party or public show.

The rock band Faith No More was established in 1981, founded by remaining members Mike Bordin, Billy Gould, Roddy Bottum and Matt Wallace, who eventually left the band. Initially recording in Wallace’s parent’s garage, Faith No more recorded their debut song “Quiet in Heaven/Song of Liberty,” which was released in 1982. The song garnered moderate attention, and Faith No More began work on We Care a Lot, which featured five songs. We Care a Lot garnered the attention of the newly formed label Mordam Records, which signed the band.

We Care a Lot was reworked and released, becoming not only a debut for Faith No More, but a debut for the label, upon its release in 1985. The album performed well, as did it follow-up, Introduce Yourself (1987) but it was Faith No More’s next effort, The Real Thing, that rocketed the band to fame after its release in 1989. The Real Thing featured the hit single “Epic,” which rose into the top ten on multiple charts, and the additional hits “From Out of Nowhere,” “Falling to Pieces,” and “Edge of the World.” The albums Angel Dust (1992), King for a Day… Fool for a Lifetime (1995), and Album of the Year (1997) followed, giving audiences the hits: “Midlife Crisis,” “A Small Victory,” “Easy,” “Digging the Grave,” “Evidence,” “Ashes to Ashes,” and “Last Cup of Sorrow.”

Faith No More disbanded after Album of the Year in 1997, but recently reunited for an extensive tour, known as the Second Coming Tour, in 2009. The band now continues to perform with the current lineup of Mike Patton, Jon Hudson, Roddy Bottum, Billy Gould, and Mike Bordin, and has announced plans for future work together. As a legacy, Faith No More has been credited with the band that invented the alternative metal genre and ultimately influenced such notable acts as Nirvana, Metallica, and Guns N’ Roses.

For more information on booking Faith No More, please contact Booking Entertainment. One of our top booking agents will be happy to work on your behalf to get you the best possible price to book any big name entertainer for your upcoming public, private or corporate event worldwide.

Booking Entertainment works to get the best possible Faith No More booking fee and Faith No More price for our clients while also providing the celebrity or famous entertainer with the level of professionalism and industry norms that they expect from an event run by a professional booking agency and production management.

Booking Entertainment uses our agency / management relationships and over 25 years of production experience to help buyers of headline / top name entertainers and does not claim or represent itself as the exclusive Faith No More agent, manager or management company for any of the artists on our site.

Booking Entertainment does not claim or represent itself as the exclusive booking agency, business manager, publicist, speakers bureau or management for Faith No More or any artists or celebrities on this website.